We haven't been getting very far from home lately so my photography has been limited to my own community.  Fortunately, I can usually find something to shoot (with camera).  With photography in mind, we went to one of the ponds and found some very obliging birds. 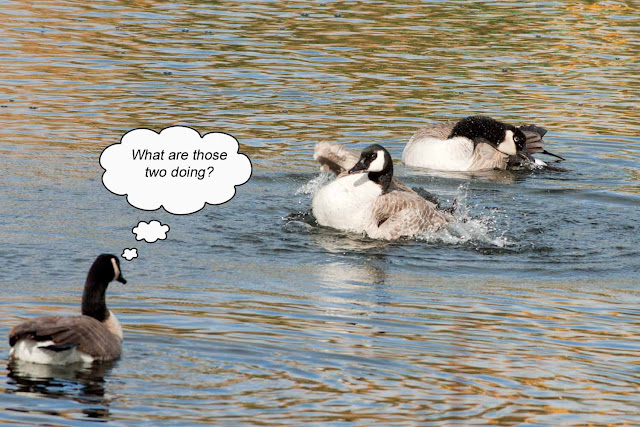 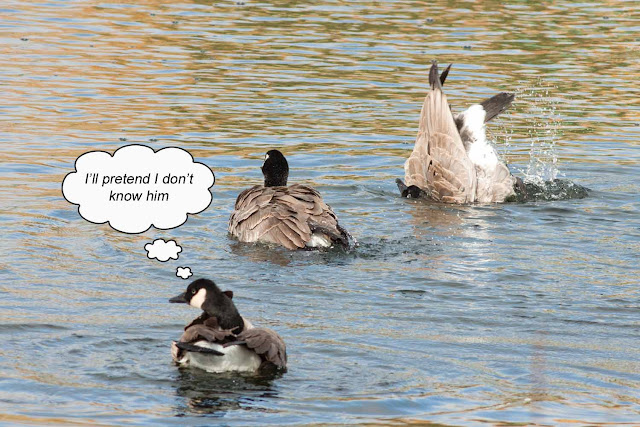 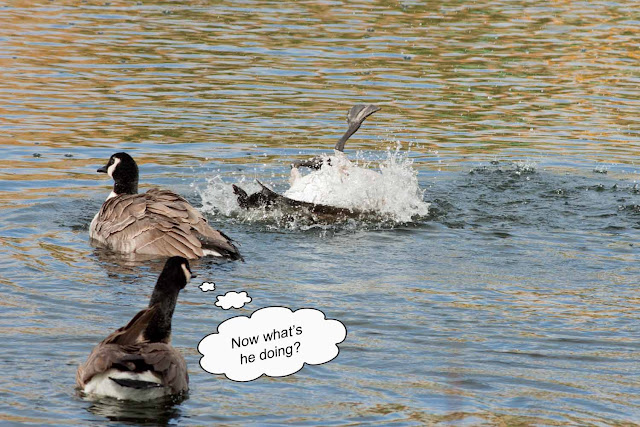 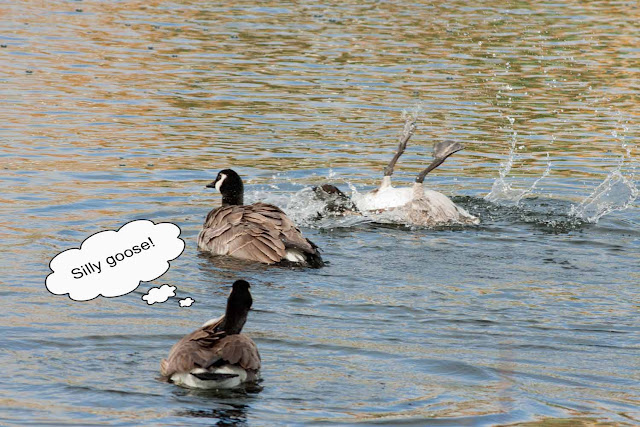 I hope you enjoyed this look at my part of our world.  See more of our world at
Our World Tuesday
Graciously hosted for us each week by
Arija, Gattina, Lady Fi, Sylvia and Sandy
Posted by Martha Z at 6:29 PM 27 comments:

Email ThisBlogThis!Share to TwitterShare to FacebookShare to Pinterest
Labels: birds, Our World 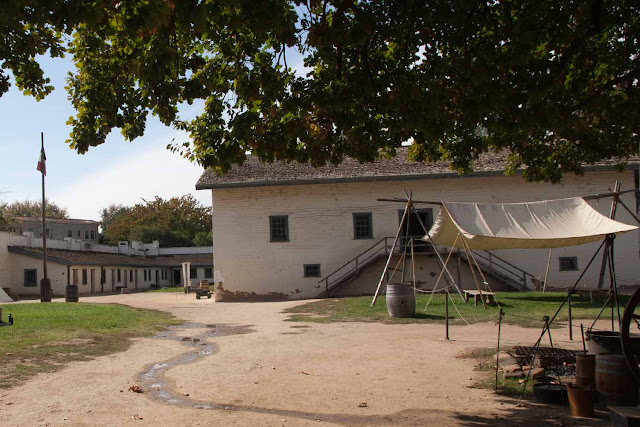 Sutter's Fort is a recreation of the fort built by John Sutter in 1840.  A German born Swiss, Sutter secured a Mexican land grant of over 47,000 acres by becoming a Mexican citizen.  He sought to establish a self sufficient colony which he called New Helvetica (New Switzerland). 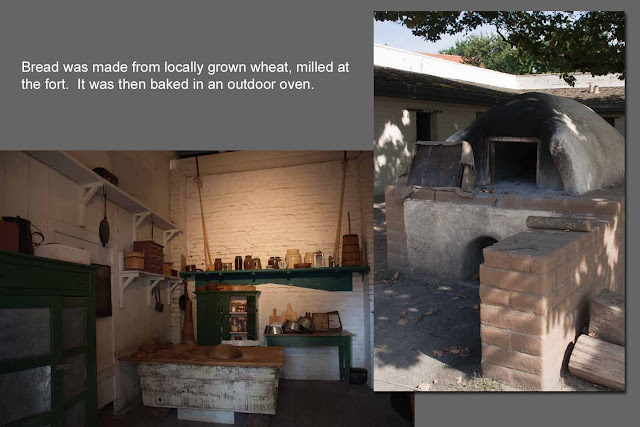 He had a successful farming operation, growing barley, peas, beans and cotton in addition to wheat.  He raised cattle, sheep, horses and mules.
Of course, who could imagine a frontier outpost without whiskey? 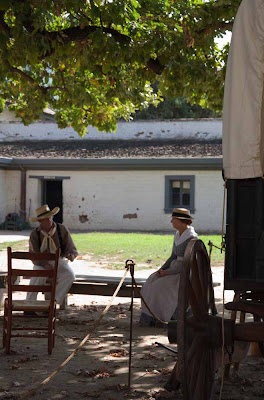 Docents in period costume explain and demonstrate life at the fort.  Many displays have audio explanations that turn on when the visitor approaches.
Sutter's colony did not last long.  John Marshall's discovery of gold in 1848 at the lumber mill he ran for Sutter was the beginning of the end.  Sutter could not hold his land against the hordes of gold seekers that began coming to California in 1849 and the American courts did not recognize his Mexican land grants.
By 1860 all that remained of Sutter's Fort was the central building.  In 1890 the site was purchased by the Native Sons of the Golden West and reconstruction was started a year later based on a map that had been published in Germany in 1847.
Today the Fort is a living history museum, a place where school children can come and learn about life in 19th century California and get some hands on experience in some of the skill that were needed then.
This is one view of our amazing world, see other views at Our World, Tuesday, hosted for us by Arija, Gattina, Lady Fi, Sylvia and Sandy.
Posted by Martha Z at 7:00 AM 19 comments:

Autumn is for the Birds

In the Summer I don't see much bird life around here.  Perhaps it is me, I don't like the heat and hide inside much of the time.  Now that the weather is cool, I'm outside and the birds are here, like old friends they have come to keep me company.  Here are some birds I have seen on my walks over the last week 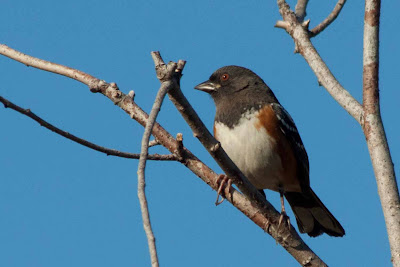 The Spotted Towhee is not uncommon.  What is uncommon is to get a good shot.  Ground feeders, they are often seen in the shade and they scurry under some brush when I come near.  This one was catching some sun after a day of rain. 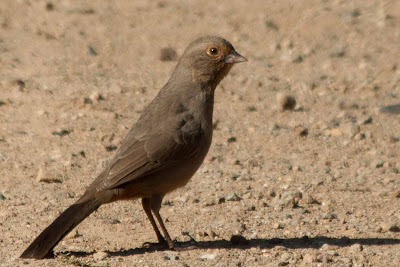 His cousin, the California Towhee 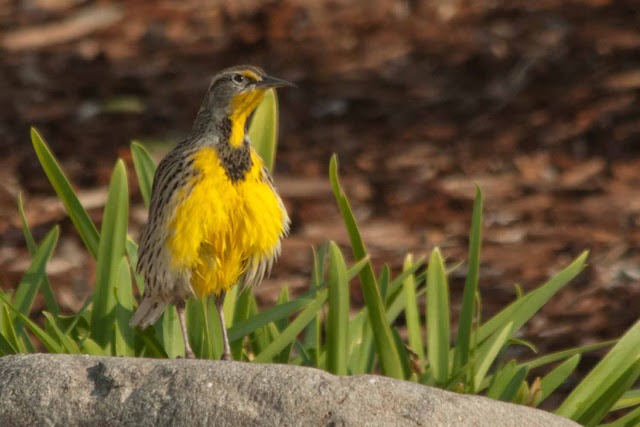 A Meadow Lark shows off his bright plumage. 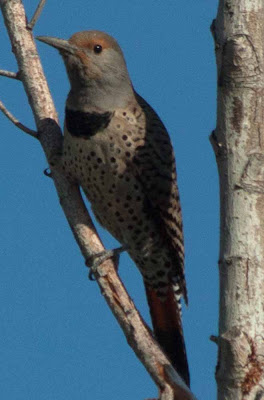 I've shown you the Acorn Woodpecker, here is another woodpecker that frequents my community, the Northern Flicker. 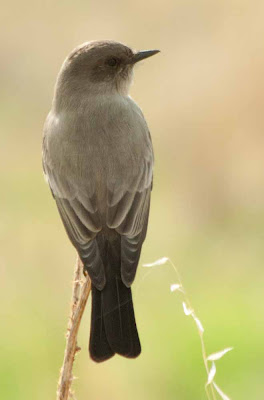 Phoebes are flycatchers, they can often be seen hawking bugs out of the air.  This one is a Says Phoebe, we also see the Black Phoebe on our walks. I noticed this ball of fluff perched on top of a branch.  I couldn't get a view of the entire bird, I think it is a Mockingbird but it is hard to be sure from this view. 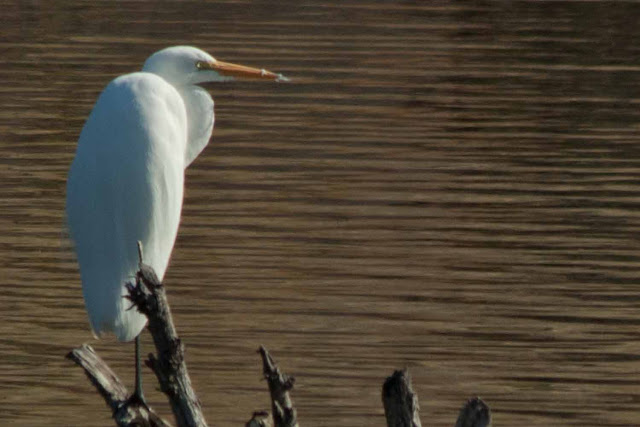 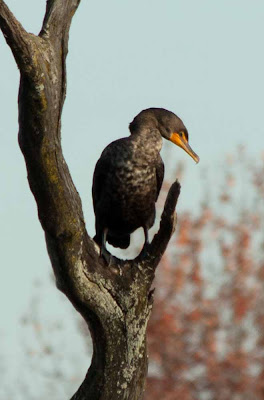 Our numerous wetland areas offer a different variety of birds.  There are plenty of mallards, coots and Canada geese, but others are around as well.

It is not unusual to see an egret, either hunting in the grasslands or by a pond.  The cormorant has it's favorite snag, often this location is too backlit  for a good shot. 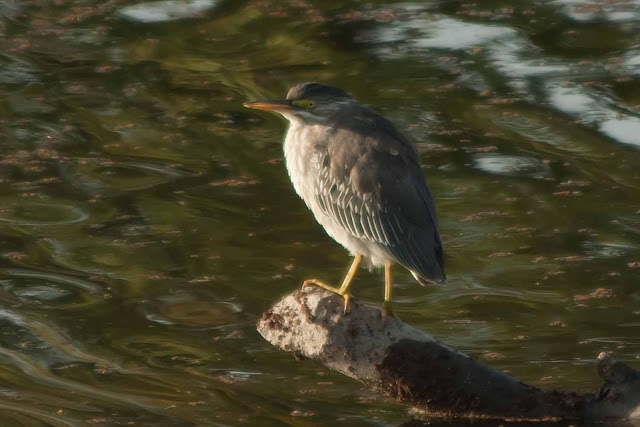 I think this little heron is a juvenile Green Heron. 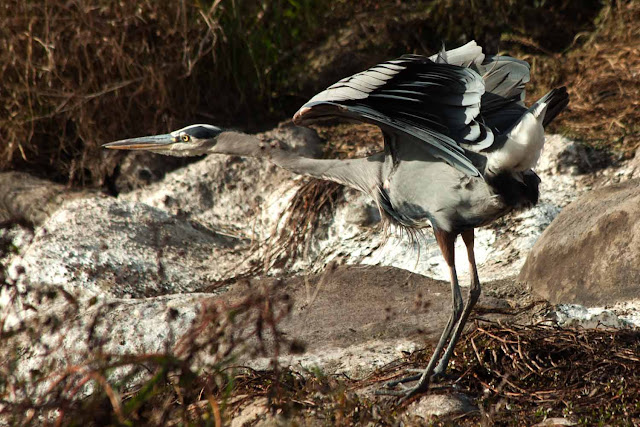 I was pleased to get some great images of this Great Blue Heron.  He posed, stretched, fluffed his feathers and then flew away.  I got some great shots.


See more of our wonderful world at Our World, Tuesday; hosted for us by Arija, Gattina, Lady Fi, Sylvia and Sandy
See more birds at World Bird, Wednesday,  hosted by Springman.
Posted by Martha Z at 8:46 AM 47 comments: 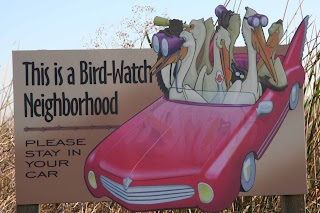 Knowing that Hubby's eye surgery would soon keep us tethered to our home, we took a trip up deep into the rice growing country of the Sacramento Valley.
Before Europeans came to California this was prime habitat for wildlife.  Migrating birds used it as a stopover and other waterfowl found it to be an ideal winter resort.
It is also prime agricultural land and the wildlands eventually became rice fields.  The birds thought the rice was a fine substitute for their natural food, the farmers didn't agree. 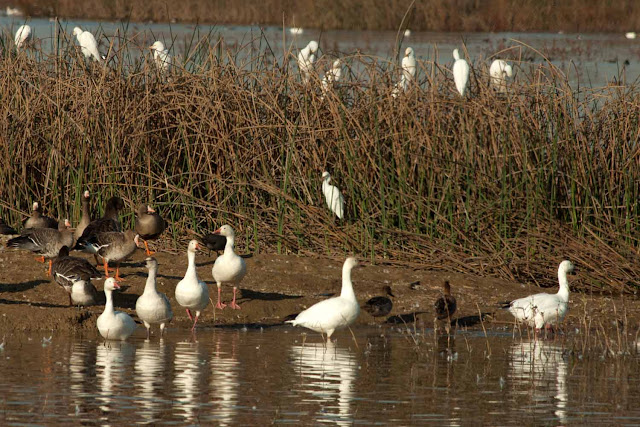 In 1937 the US Fish and Wildlife Service began to turn some dry alkaline land into wetlands.  Today there are 35,000 acres of wetlands and uplands and an additional 30,000 acres in conservation easements.The new wetlands help to lure the birds from the rice fields until after harvest. 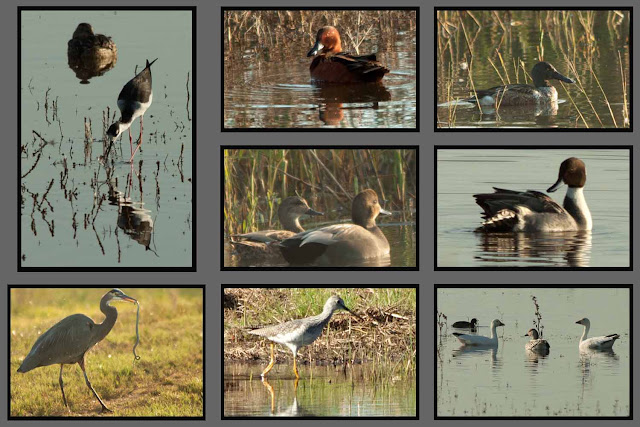 There is a two mile walking trail and a much longer auto tour.  Except for two spots along the auto tour, visitors are required to stay in their vehicle. I saw Black necked stilts, pied-billed grebes, snow geese, white fronted geese, northern shovelers, American widgeons, cinnamon teals, gadwalls, American white pelicans to name just a few.  I was thrilled to see the heron with snake. 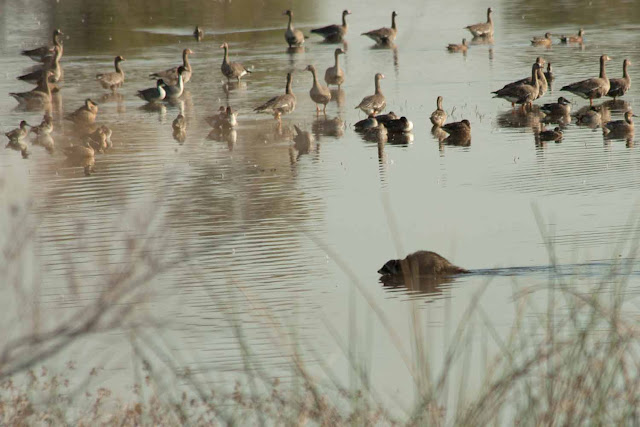 I spotted this creature sneaking across the pond.  I thought it was a beaver but when I downloaded the shot it was obvious that it was a raccoon. 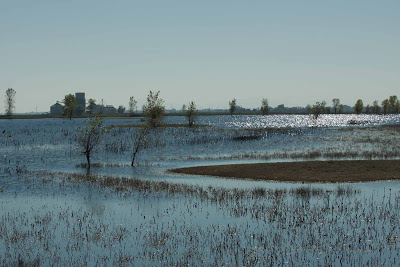 We were pleased with the variety of bird life that we found at the complex headquarters but disappointed that there were no sandhill cranes.
We learned that the cranes could be found at the Llano Seco unit so the next day we went there.  Here the land was being flooded across the road from some rice fields.
See those hazy skies?  One problem for the photographer in the Sacramento Valley is the practice of burning the rice fields after harvest.  Day after day the sky is filled with smoke haze. 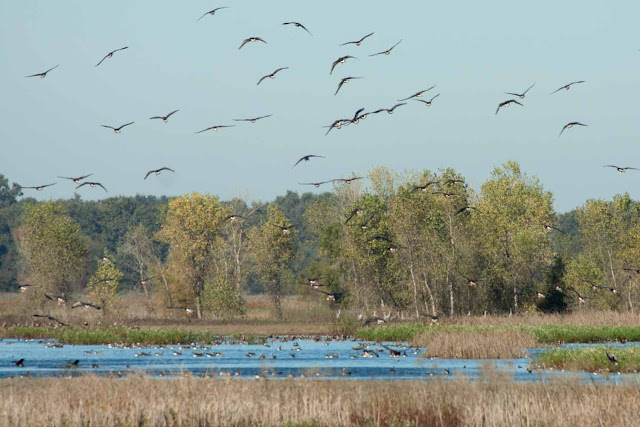 There were lots of geese and I could here the cranes but they were far away.  If you enlarge this shot you might be able to pick them out under the trees in the background. 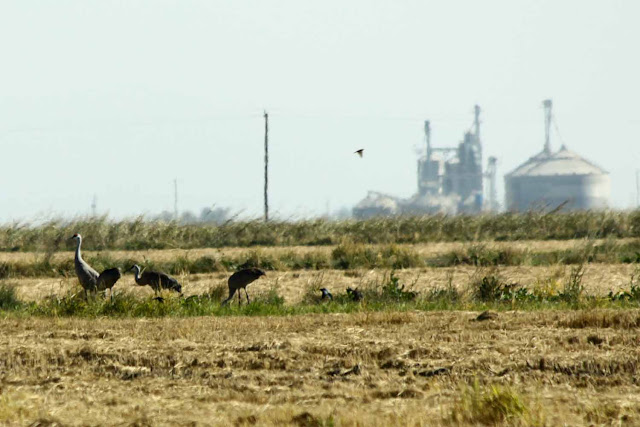 Across the road, in the rice field there were many more but too far for a great shot.
Rice farmers with conservation easements flood their fields after harvest providing additional habitat.
I know that conservatives think government should do less, only spend money on things like war but it is my belief that our nation would be far poorer with a do nothing government.  Yes, we need farms and the food they provide but I don't think I would like to live in a world where the only animals were humans and their factory farmed meat animals.
See more of our amazing world at Our World, Tuesday, hosted for us by
Arija, Gattina, Lady Fi, Sylvia and Sandy.
See more great birdlife at World Bird Wednesday, hosted by Springman 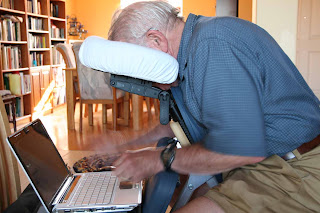 Now Hubby is spending 10 days in a head down position while his eye heals.  We're hoping that when he sees the doctor on Wednesday he will again be free to roam.
Posted by Martha Z at 7:00 AM 38 comments: