After spending the morning at San Luis National Wildlife Refuge we headed to the Merced Unit. 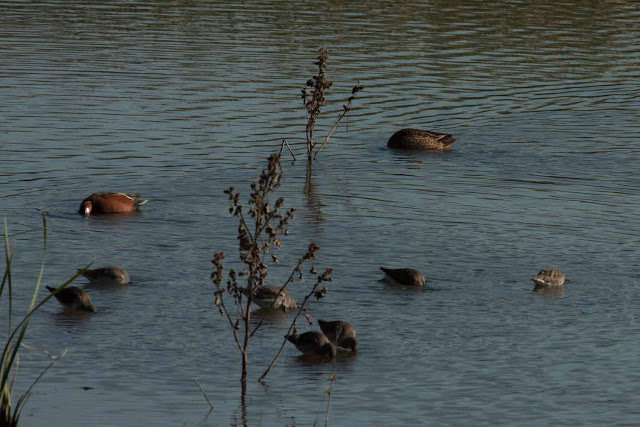 While Hubby napped, I took my camera up to the viewing platform.  It wasn't nap time in this pond, it was feeding time.  It can be hard to id birds with their heads in the water but I believe we have some Dunlin and a pair of Cinnamon Teals. 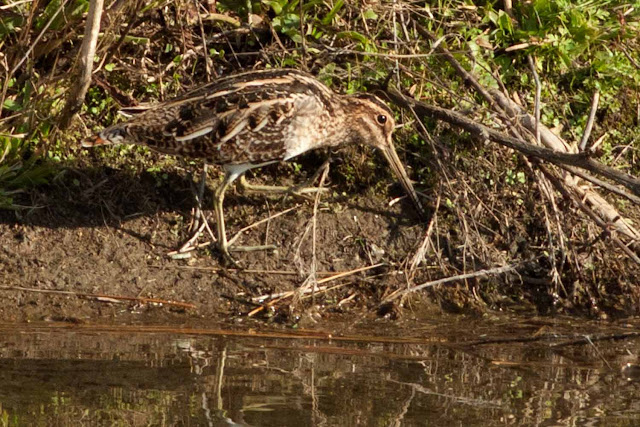 Another birder called my attention to this guy, saying it is a common snipe.  I'll take her word for it.  Even with all of my field guides I am often unsure of shore bird id.  To my eye many are quite similar and the field marks subtle.  Identification often falls to a single characteristic and juveniles may not display it. 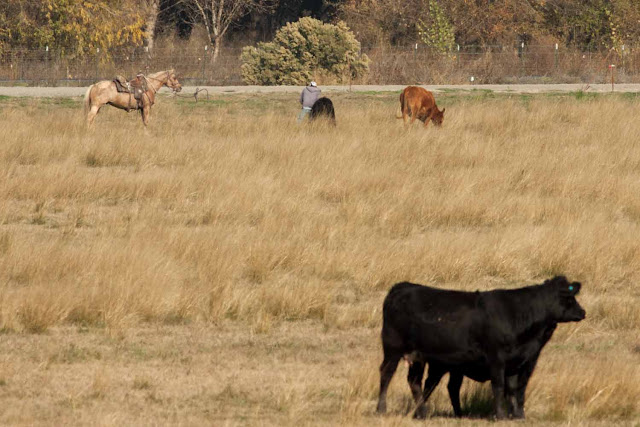 From the viewing platform my attention was drawn to a very different sight.  This cowman had roped a calf, I think he was trying to tag it.  His well trained quarter horse kept the rope tight. 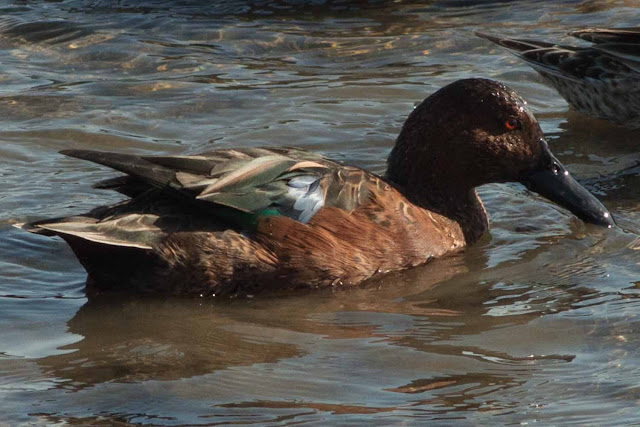 Back to birding, I spotted the Cinnamon Teal with his head out of the water.  I like that splash of color on his back and his red eye. 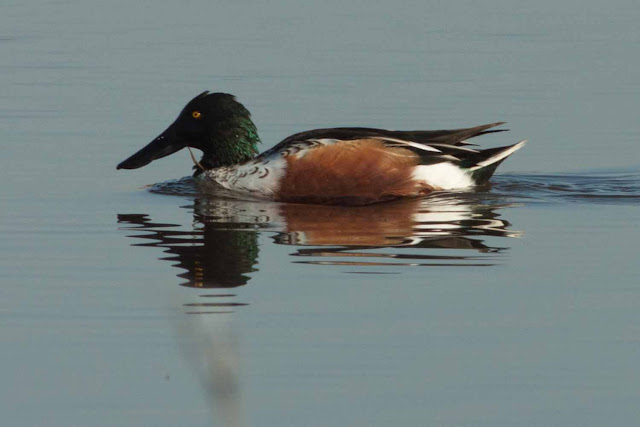 When nap time was over, we headed out on the auto tour.  There was an amazing variety.  The Northern Shoveler picked his head up out of the water just long enough for me to get a shot of his large bill and blue-green head. 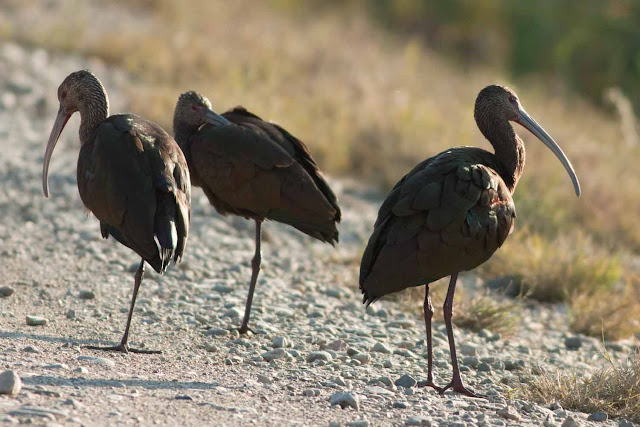 We ran into a road block.  A flock of White Faced Ibis were reluctant to leave the road.  I know, they don't have a white face but the guides say they will in breeding season.  Nearby was a huge flock of Sandhill Cranes.  They were backlit,  though and the image I shared last week from San Luis was much better. 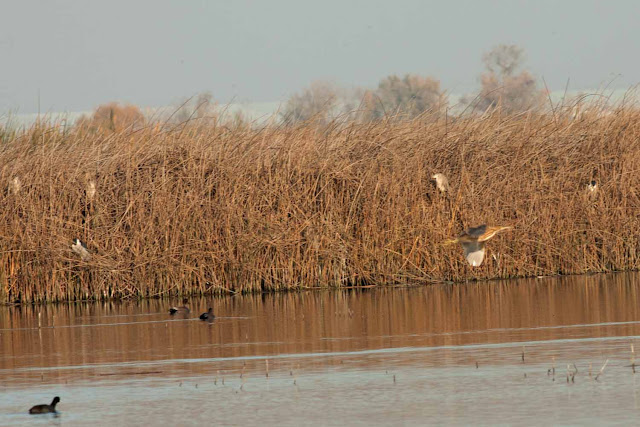 I spotted over a dozen birds in these tules and another flying by.  What were they? 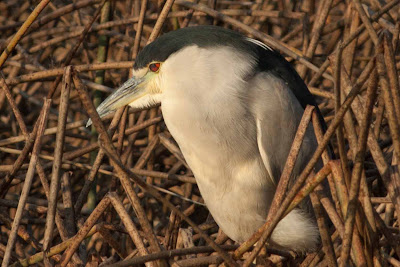 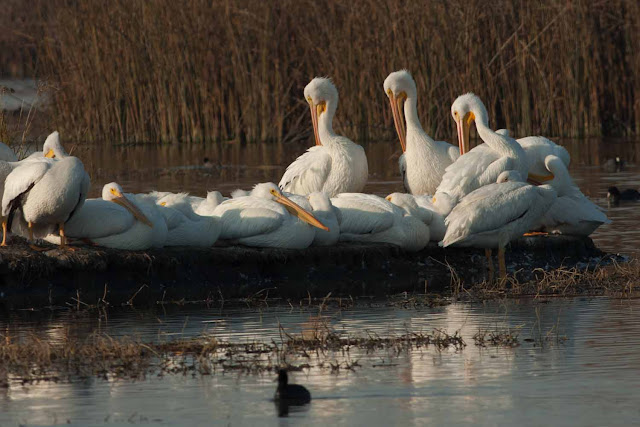 The same pond was host to a flock of American White Pelicans. 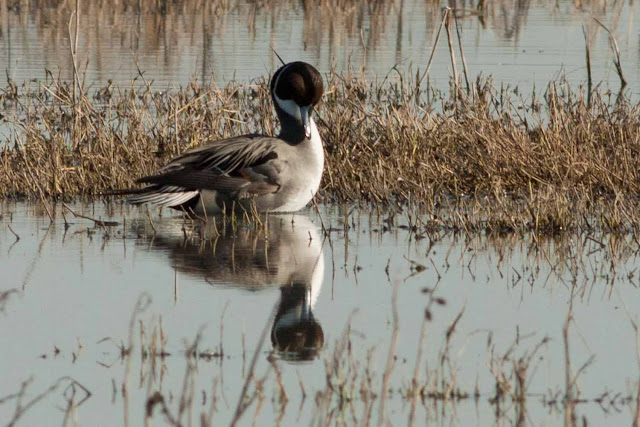 I think Pintails are elegant looking birds and this one seems to agree.  Doesn't he look self satisfied? 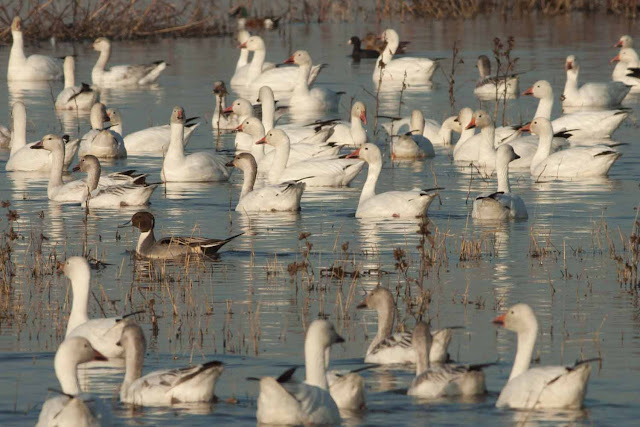 We saw another one floating with a flock of Snow Geese.
It was a wonderful day of birding and wildlife viewing.  I hope to return before the season is over, but then, there are a lot more refuges in California to explore.
You can see more of our amazing world by going to Our World, Tuesday, hosted for us each week by Arija, Gattina, Lady Fi, Sylvia and Sandy.
To see more birds, check out World Bird, Wednesday, hosted by Springman.
Posted by Martha Z at 7:00 AM 39 comments: 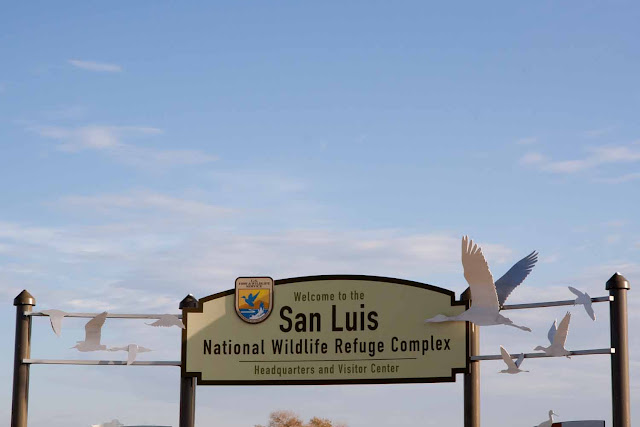 The coast and Central Valley of California are on the Pacific Flyway, the migratory route for many species of birds.  Some birds stop and rest in California before heading further south,  others think it is a fine resort and stay all winter. 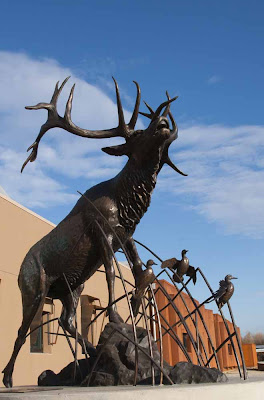 San Luis NWR serves a double purpose, it is host to many birds but more importantly it is the home of a herd of Tule Elk.
Tule Elk are the smallest subspecies of elk and native to California.  Once numbering in the 100s of thousands, their numbers dropped to 28 know individuals before measures were taken to protect them.
San Luis was host to the first herd and now there are several more in the central valley as well as the coastal mountains and Point Reyes National Seashore.  There is also a herd in the Owens Valley which I saw often as we traveled up and down Highway 395.
The Owens Valley herd roams freely over land owned by the Los Angeles Department of Water and Power so I was a bit surprised to see the elk penned in by a high fence.  I suppose it is not surprising, the farmers nearby probably don't want the elk grazing on their crops. 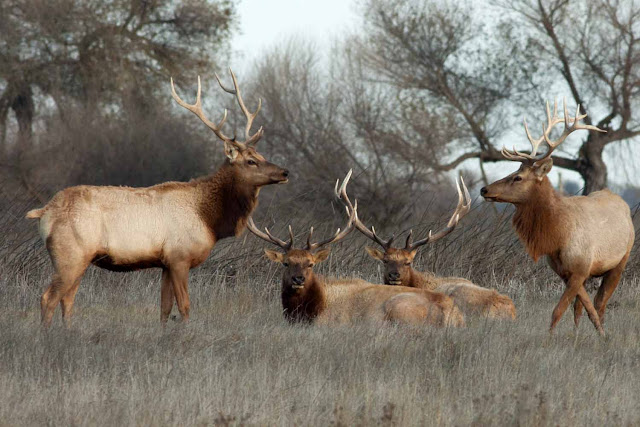 Since we visited in early December, the bulls were no longer with the cows.  They still have their antlers, though, they won't loose them until February.  The bull elk were near the fence where we could get a good look and poke our lenses through the wire. 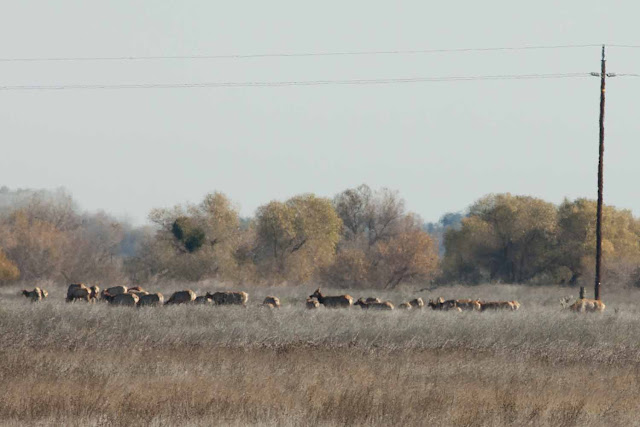 The cows and calves, however,  were out in the center of the enclosure so even my telephoto lens couldn't get a very good shot.  It did look like there was one bull still with them. 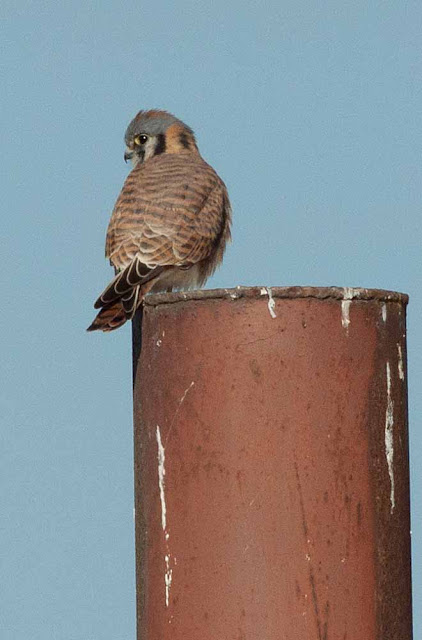 There was not as much bird life as we would see later at the Merced Unit but I did get my best shot to date of a kestrel.  He flew from fence post to fence post as we drove along, keeping his eye on us from over his shoulder. 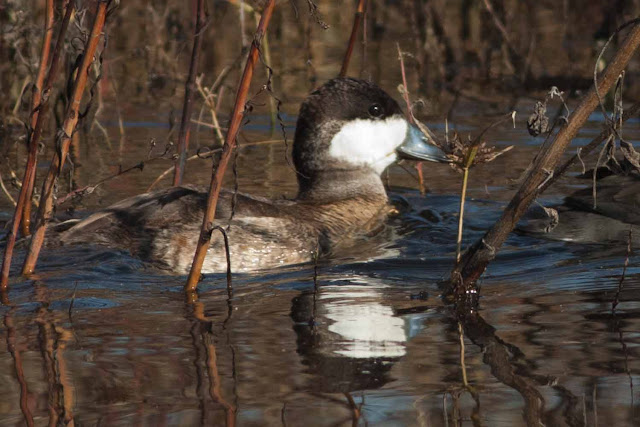 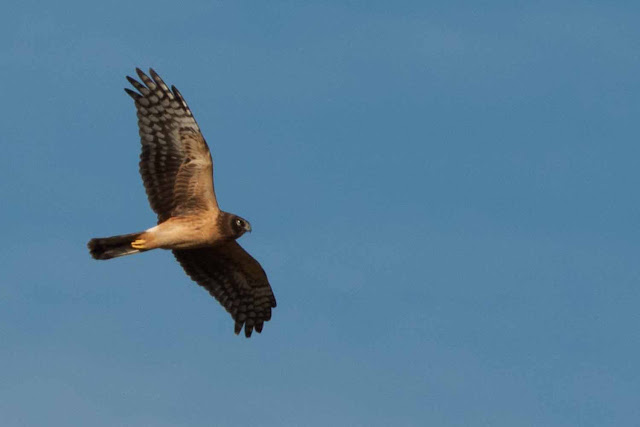 Several female Northern Harriers scanned the ground looking for a meal.  You can just glimpse this one's distinguishing white rump where it wraps around her flank.
We kept looking for Sandhill Cranes, we could hear their distinctive call and knew they were around somewhere. 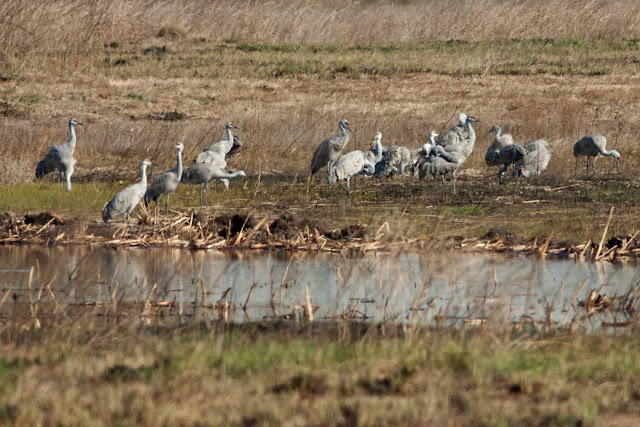 There!  We finally spotted a small flock. 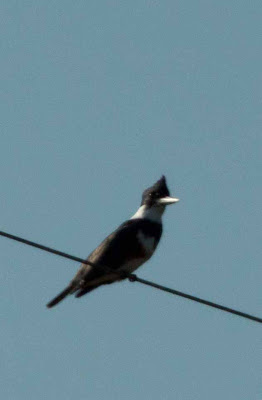 On our way out of the refuge I spotted this belted kingfisher.  So far this is the best shot I have gotten of the species.  Actually, it is the only shot.  I've seen them several times but they are shy and fly off before I can get my camera up.

We also saw gadwalls, northern shovelers, black necked stilts, coots and mallards.  We had been told that there was a better variety of birds at the Merced unit so after a picnic lunch we headed there, about 20 miles away.


See more views of our wonderful world at Our World, Tuesday; hosted for us by Arija, Gattina, Lady Fi, Sylvia and Sandy.

See more of the world or birds at World Bird Wednesday, hosted for us by Springman.
Posted by Martha Z at 7:00 AM 36 comments:

Who Said Birds Are Nice

Hubby and I have been away, in search of photos.  Now I have around 400 to sort through!  These reminded me of an essay we once read.  A lady, who should have known better, said people should be more peaceful, like birds. 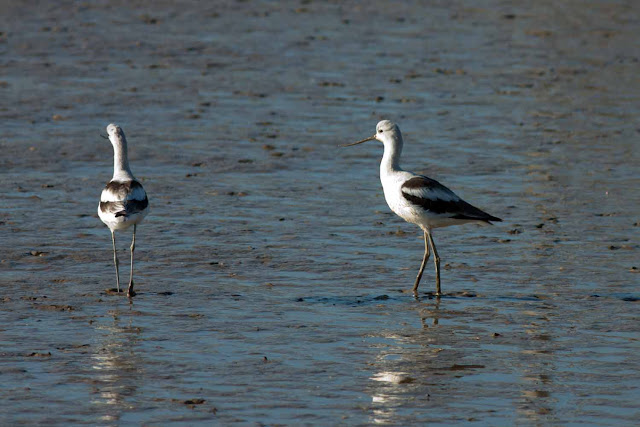 I saw avocets feeding in the tidelands north of San Pablo Bay. 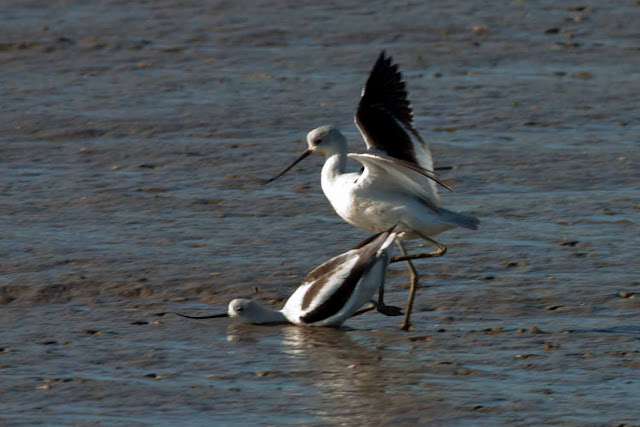 The bird on the right obviously didn't like the other bird invading its feeding territory. 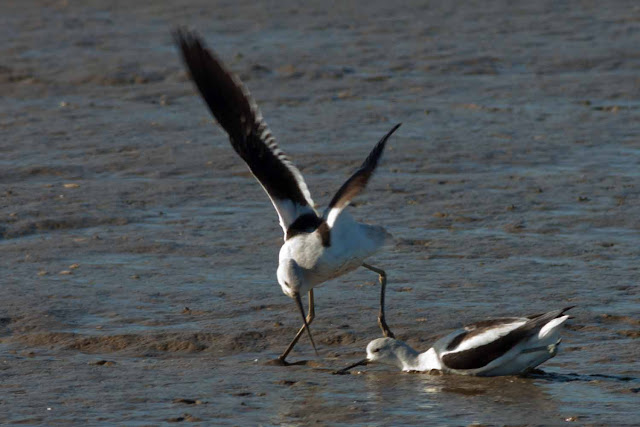 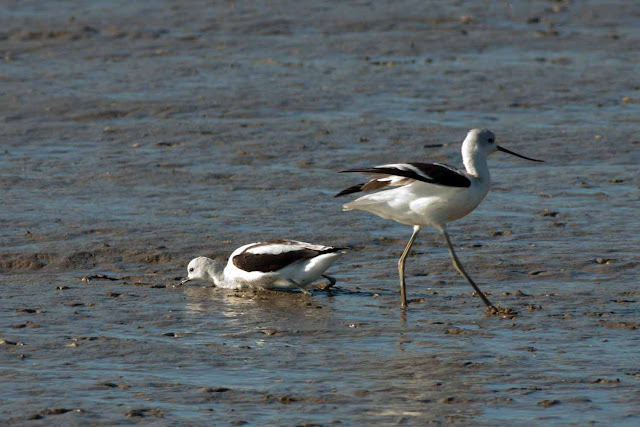 Once he felt he'd made his point, he turned and walked away. The interloper beat a hasty retreat.
Seeing the behavior of animals is, for me, the most interesting part of wildlife viewing.
See more of our wonderful world at Our World, Tuesday, hosted for us by Arija, Gattina, Lady Fi, Sylvia
and Sandy.
and Watery Wednesday (thought more muddy than watery)
View more of the birds in our amazing world at World Bird Wednesday, hosted for us by Springman.
Where did I find these birds?  Here.
Posted by Martha Z at 11:17 AM 32 comments: