We saw plenty of wildlife on our recent trip to Glacier.  Unfortunately they did not sit still and pose.  A better wildlife photographer than I would spend all day in a blind, camera on tripod, waiting.  Unfortunately, my tripod broke in transit and I didn't have the time needed to patiently wait. 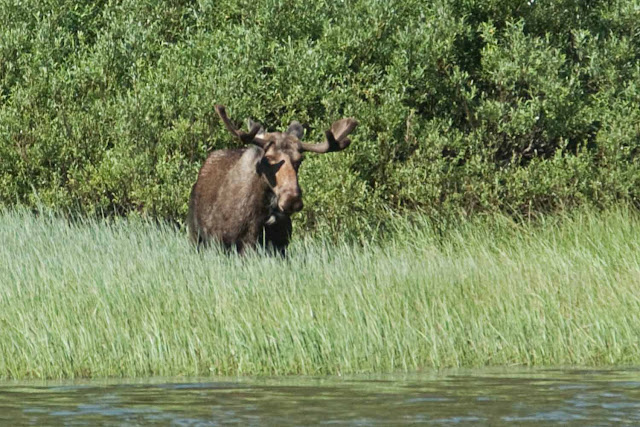 Our most exciting encounter was with this bull moose.  It was in the grass near the dock when we got off the boat in the Many Glacier area.  Considered more dangerous than a grizzly, he was none too happy to see us. 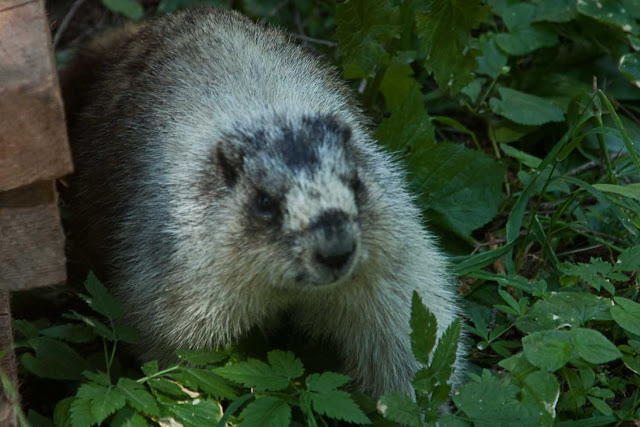 Less threatening was this marmot we saw along the trail on our way back to the lodge. 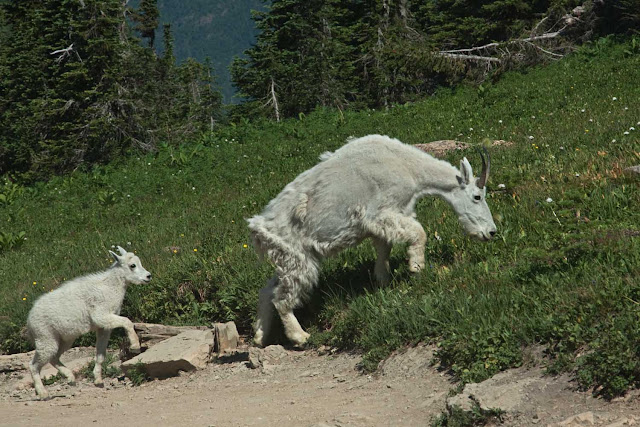 Around Logan Pass, the goats ignored us, sharing the trails with the human hikers. 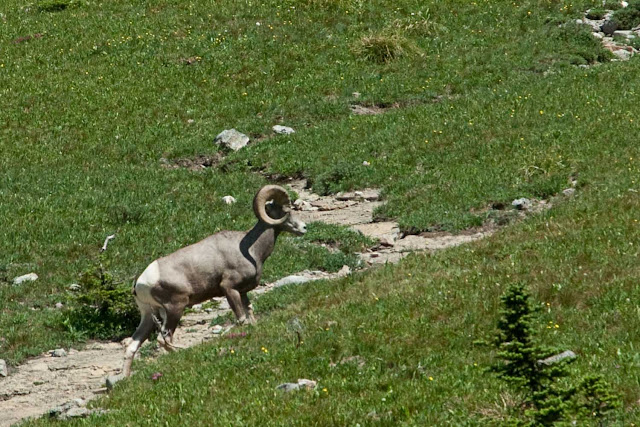 A group of rams ran across the trail and quickly moved away from human contact but still close enough for a shot of the impressive horns on this guy. 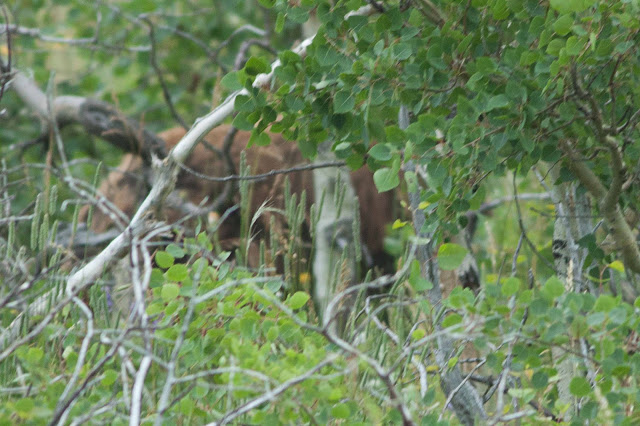 We just caught a glimpse of this bear from the bus.  It is barely good enough to see that it has the concave shaped face of a grizzly rather than the convex profile of a black bear.  While I wish it had been out in the open for a better shot I was glad I was in the bus rather than in the woods, up close and personal!
Linked to Camera Critters
Posted by Martha Z at 10:00 AM 13 comments: 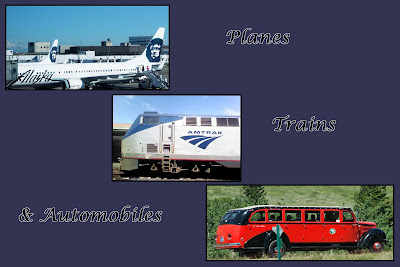 Or, how I spent my summer vacation.

We don't always spend our vacations camping.  Sometimes we try something different.  We wanted to visit Glacier National Park in Montana but didn't feel like driving that far and we were less than enthusiastic about camping in grizzly bear country, so I booked a tour called "Great Lodges of Glacier".  A tour that put solid walls between us and the grizzly bears at night.
To get to the starting point we flew from Sacramento to Portland, Oregon and then rode Amtrak's "Empire Builder" overnight to East Glacier, Montana. 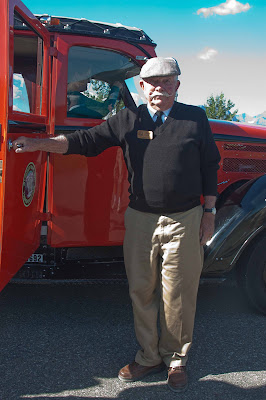 After that is was Jammer Joe's responsibility to get get us from place to place in one of the historic canvas topped touring buses.  These buses, built in the 1930s were renovated between 1999 and 2002.  Be sure to bring sunscreen when the canvas is rolled back for viewing the magnificent Rocky Mountains. 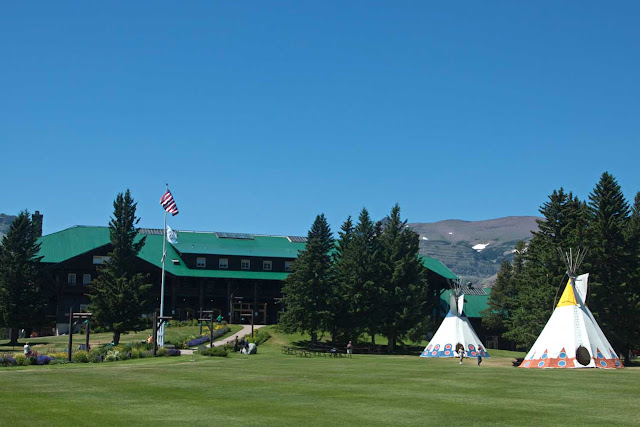 The first stop is Glacier Park Lodge in East Glacier.  The lodge is located on the Blackfeet reservation and is across the road from the railroad station.  It was built by the Great Northern Railroad to lure tourists to travel west on their trains and opened in 1913. 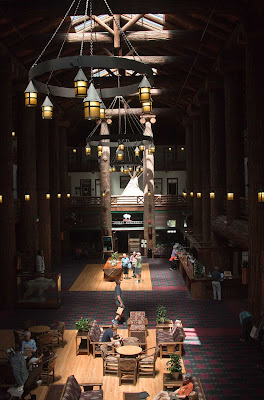 In the lobby, the roof is supported by huge timbers, whole tree trunks 36 to 42 inches in diameter and 40 feet long.  The logs still have the original bark.

These lodges are not for those who feel the need to be connected.  There are no televisions in any of the lodges and cell phone and wi-fi coverage poor to none. 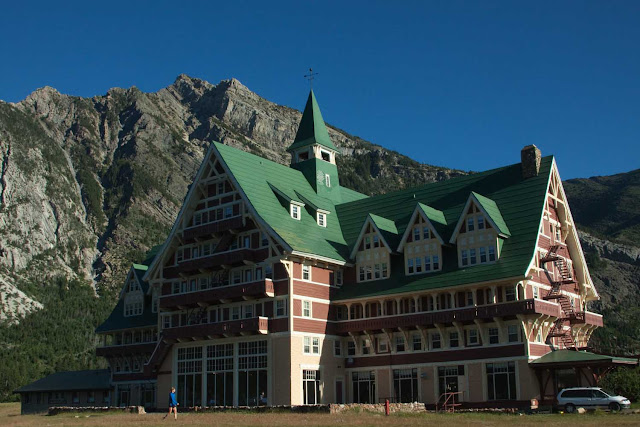 Next stop was Canada at the Prince of Wales Hotel in Waterton Lakes Nation Park, the Canadian portion of Waterton-Glacier International Peace Park.  The next morning there was time for a hike or sightseeing in town followed by afternoon tea in an area off the lobby.  The highlight of the tea was the amazing view through those picture windows. 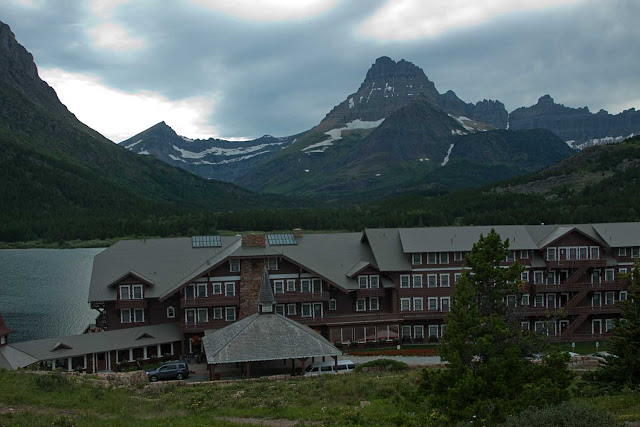 Then it was back to the United States for a two night stay at the Many Glacier Hotel.  This was our favorite due to the magnificent setting.  A boat ride across two lakes led to several trails.  We chose to walk the two miles back to the lodge, talking and calling out "hey, bear" lest we startle a grizzly in the woods. 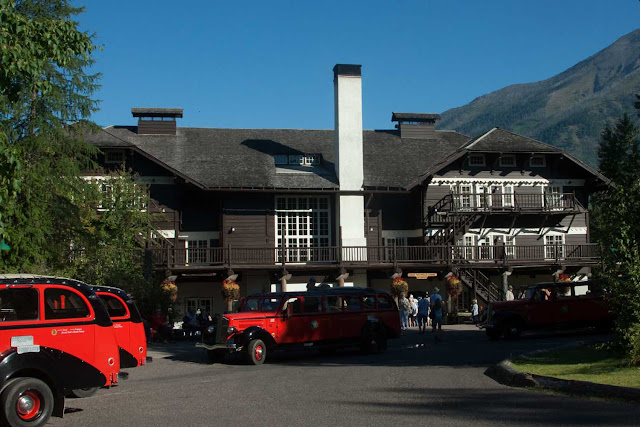 The last night of the tour was at Lake McDonald Lodge, the only one on our tour not built by the Great Northern Railroad.  The tour would have taken us to the train depot or airport in Kalispell but we asked them to drop us at the Belton Chalet in West Glacier. 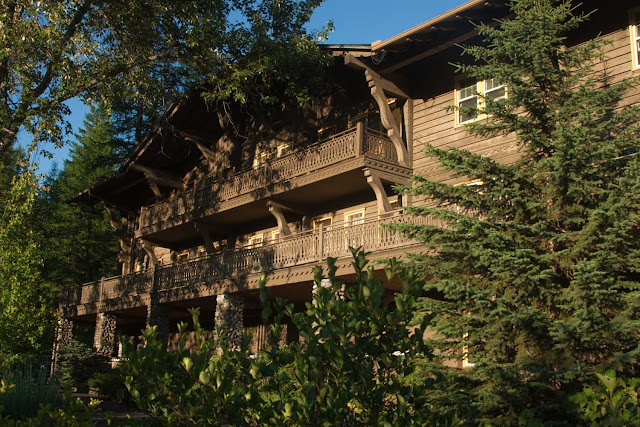 This is another of the original Great Northern hotels and is now privately owned.  It had been allowed to fall into disrepair after Word War II when it was sold by the Railroad.  Now lovingly restored, it maintains its historic charm while giving guest modern conveniences.
The staff drove us to the park service's Transit Center where we were able to catch the free shuttle to trail heads.

Linked to Our Word, Tuesday
Posted by Martha Z at 9:05 AM 12 comments: