Yellowstone is more than just a collection of geothermal features, it is America's premier wildlife habitat.  Step away from the developed areas and you step into a different time and place, a place where the animals reign. 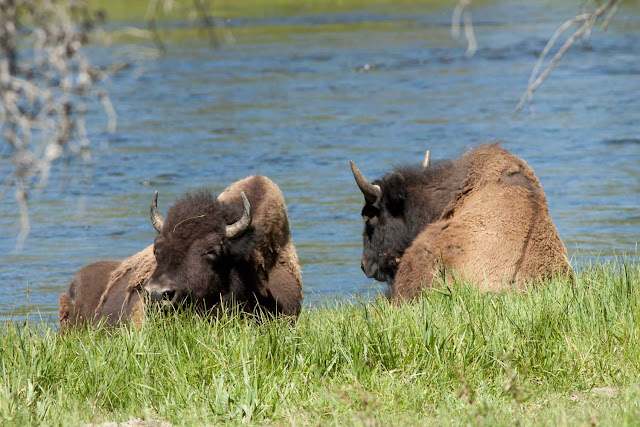 Bison are so plentiful in the park that after a while you are tempted to say, "just another bison". 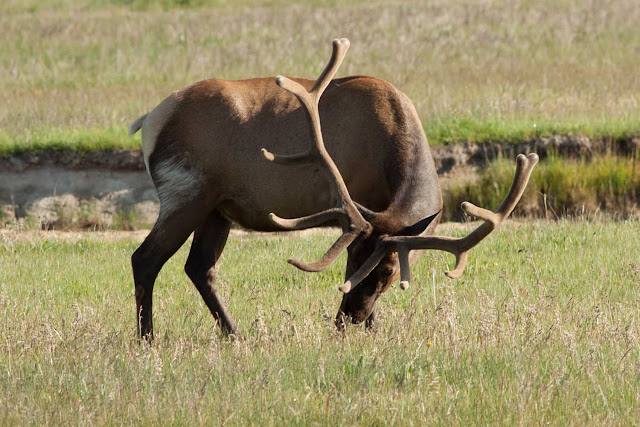 There were plenty of elk, too, but only a few males presented themselves for a close up.  I would have liked some shots of the cows and calves but they didn't cooperate. 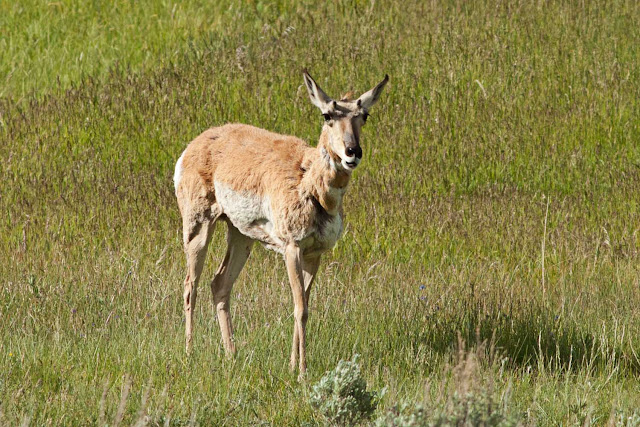 For years I have wanted to get a shot of pronghorn but they have always stayed out of reach from my lens. 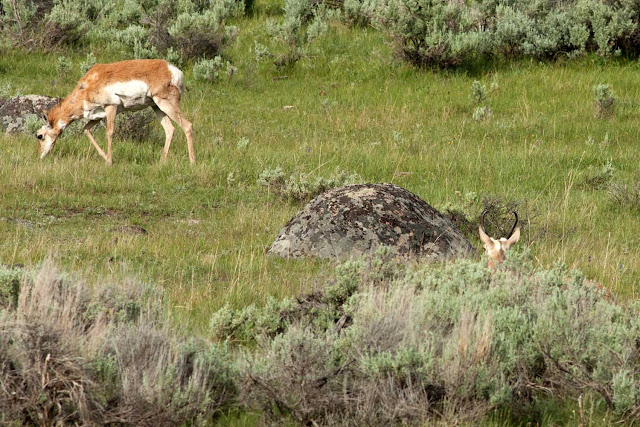 The mature males were still elusive, here one was hiding behind some sage with only the back of his head and horns peeking out. 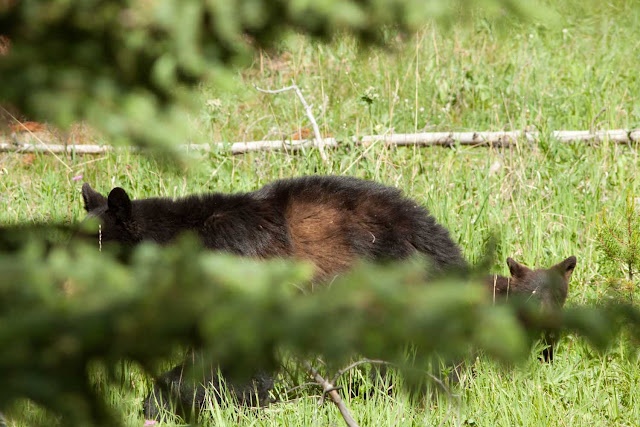 This black bear mom and cub was also hiding behind the vegetation.  I would have liked to have seen a grizzly (from a distance) but none appeared. 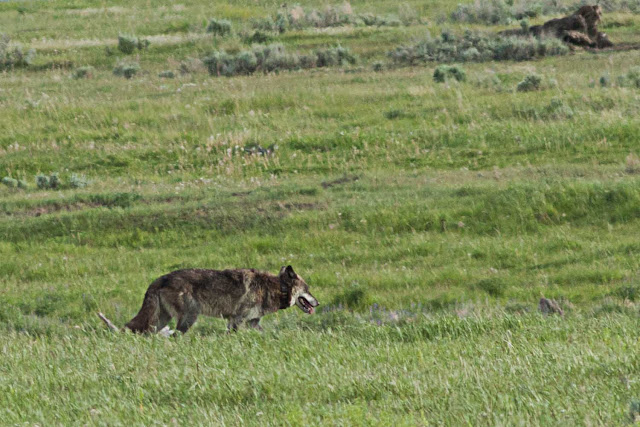 We did spot a wolf, though, trotting through a herd of bison.  It was quite a ways from the road, almost out of range for my lens.  It appears to have a radio collar.
We had hoped to see moose but were out of luck.  We didn't see sheep, either though if we had hiked up Mt. Wasburn we might have.  I'm not complaining, there is an amazing variety of wildlife in Yellowstone and I am pleased with what we did see.  I guess we'll just need to return.
Posted by Martha Z at 11:27 AM 16 comments:

Skies from our Trip

We were camping recently at the North Rim of the Grand Canyon and Yellowstone. 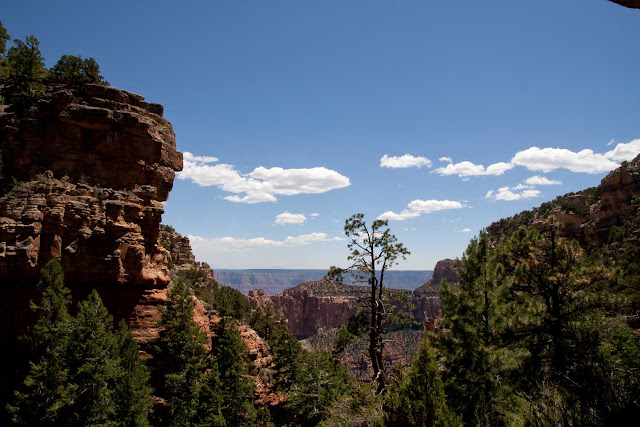 Our first stop was the North Rim where we were greeted by mostly clear skies. 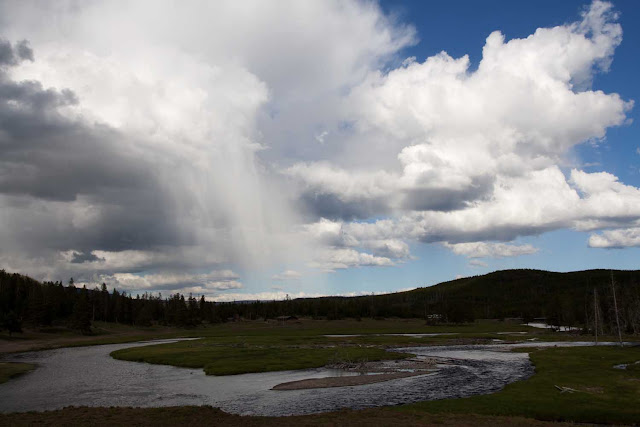 When we got to Yellowstone and our campsite on the Madison we were treated to a few clouds and sprinkles. 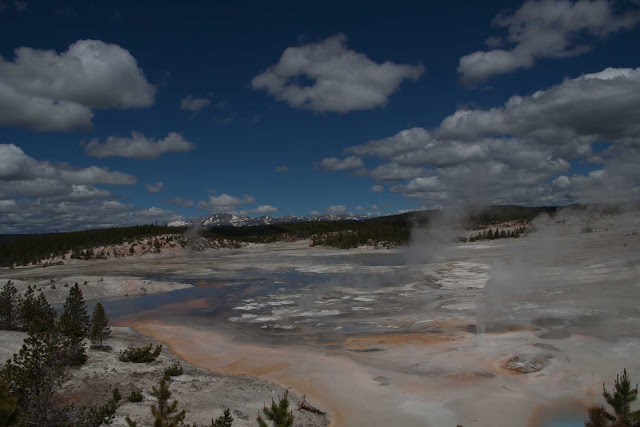 At Norris Geyser Basin the sky seemed to come to Earth as the steam rose up to meet it. 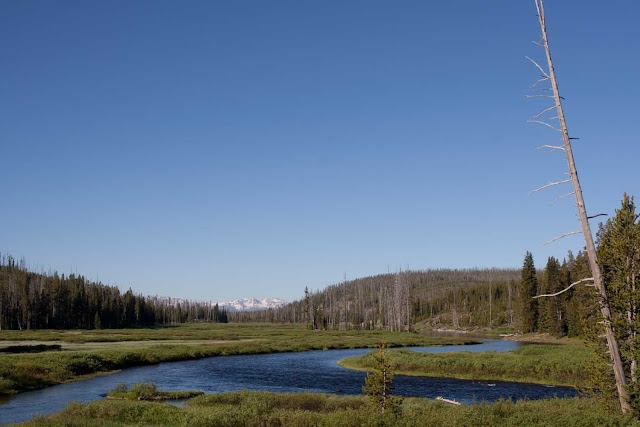 As we left Yellowstone the sky had turned an unrelenting blue, a promise of hot days to come, time to head for home. 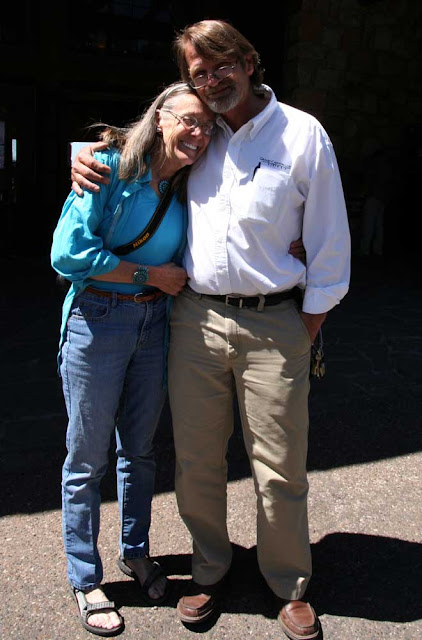 For those who might be wondering, yes, we did see Gaelyn and Mike when we were at the Grand Canyon.  We had a lovely visit and got some tips on where to hike.

These have been some of the skies we saw on our recent trip, to see other skies from around the world visit Sandy and Sylvia at SkyWatch, Friday.
Posted by Martha Z at 8:57 AM 20 comments:

The trail to Upper Yosemite Falls is steep and much of it is over easily eroded decomposed granite.  On our recent visit there was a crew working to improve the trail. 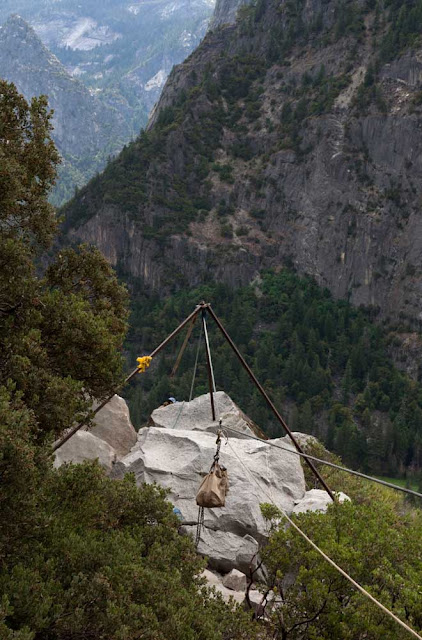 It's not an easy job.  First the granite must be cut from large boulders off the trail. 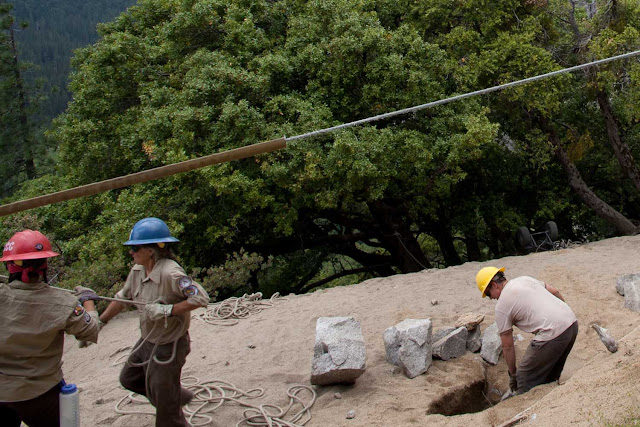 Then hauled by people power to where it is needed.  This is wilderness so no motor driven equipment is used. 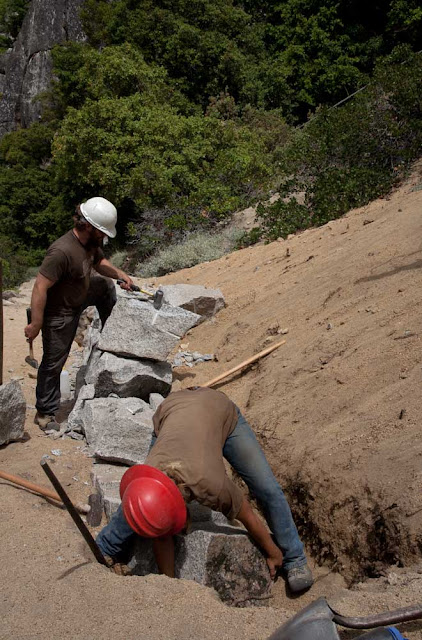 They set the blocks in place. 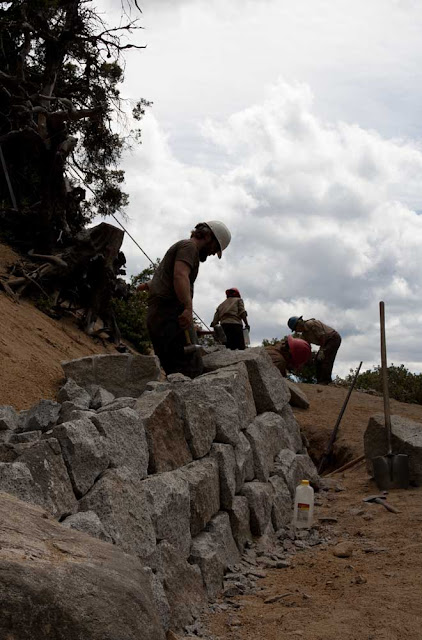 They build a wall, the old fashioned way. 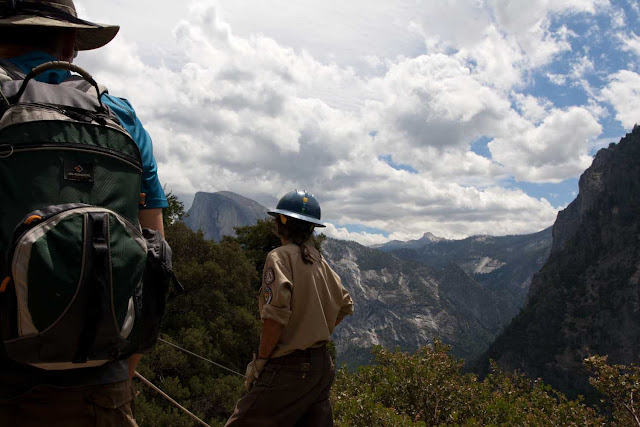 It's hard work but oh!  What a view!
We do appreciate their hard work, making the trail safer for everyone.

See more of our world at That's Our World, Tuesday; hosted for us by Arija, Gattina, Lady Fi, Sandy and Sylvia.

Email ThisBlogThis!Share to TwitterShare to FacebookShare to Pinterest
Labels: Our World, Yosemite

We had planned a camping trip to Yosemite before we knew about the transit of Venus.  We didn't know what time the sun would drop behind the cliffs. 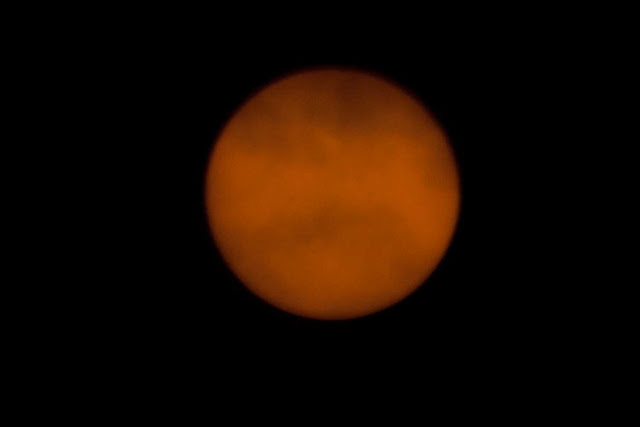 As it turned out, that was not a problem, the sun doesn't set in the valley until about 6:30 this time of year.  What gave us more of a worry was the clouds that had started to build. 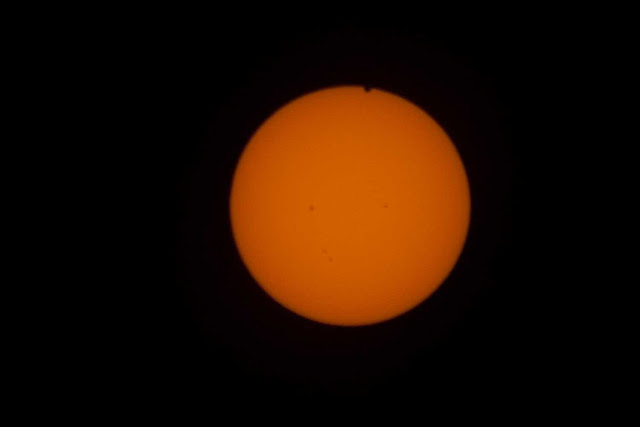 The clouds moved off just in time to give us a clear shot as Venus began its move across the sun. 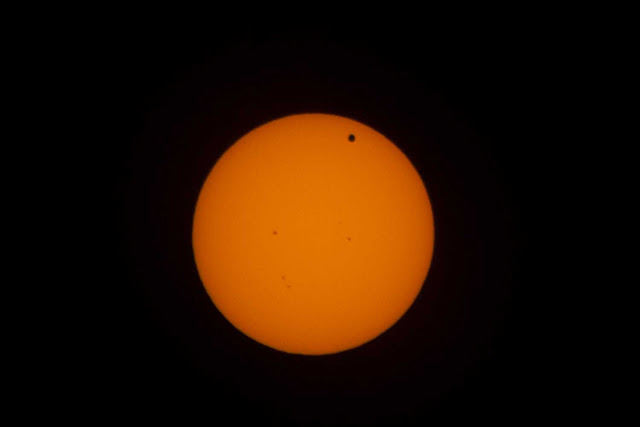 We had set up our tripods as the edge of a meadow where we could get a good view of the sky. 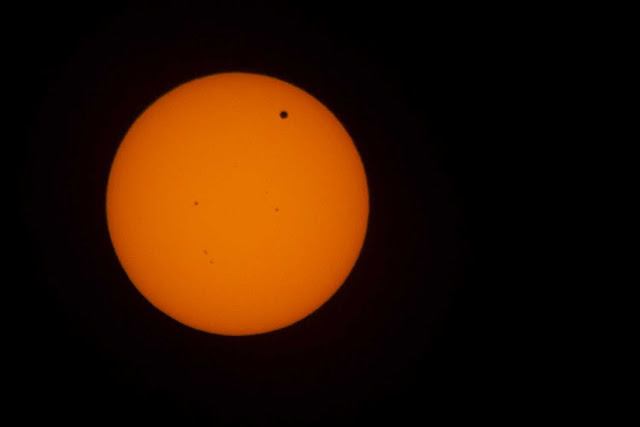 We attracted quite a bit of attention from passers-by.  Some knew instantly what we were doing, others became interested once we explained.  We shared our viewers and encouraged people to look at the display on Jules' video camera. 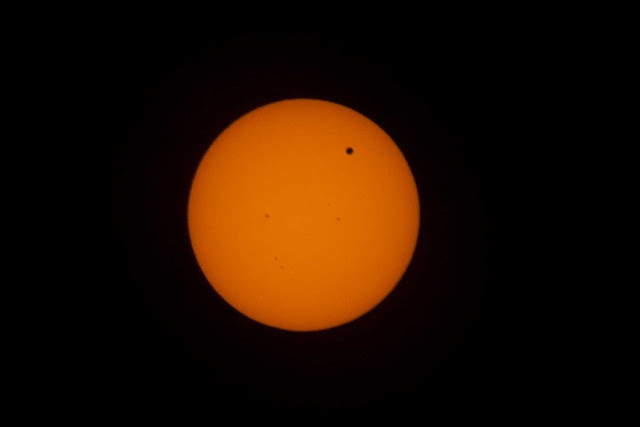 After a couple of hours we packed up our tripods and headed back to the campground.  The next occurrence will be in 2117 so we were glad we saw it this time.

Find more sky views at SkyWatch, Friday, hosted for us by Sandy and Sylvia.
Posted by Martha Z at 11:36 AM 32 comments: