We recently visited with friends in Santa Cruz, California.  When we're in that part of the state I can't pass up a visit with the sea otters at Moss Landing. 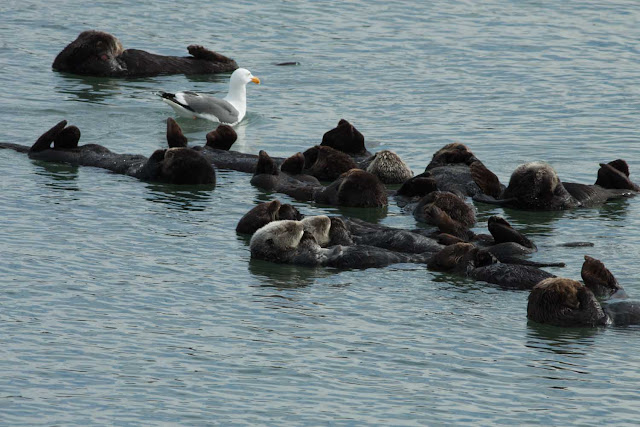 Most of them group together in a "raft", they just lounge around, napping. 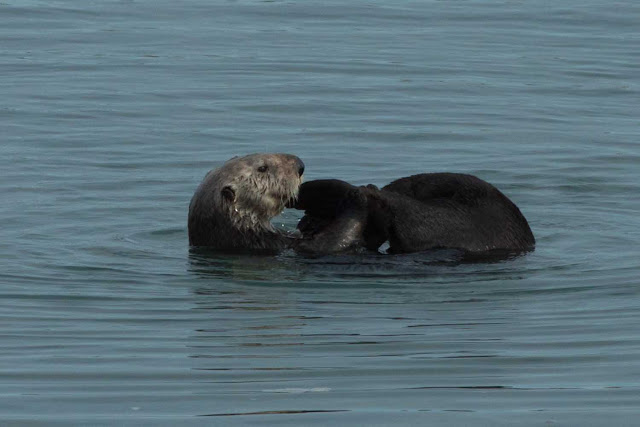 Some drift of to groom or chew on their toes. 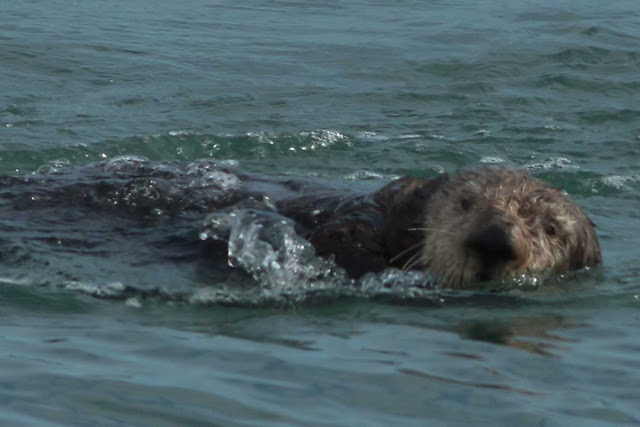 Others go off for a swim. Dog paddle? 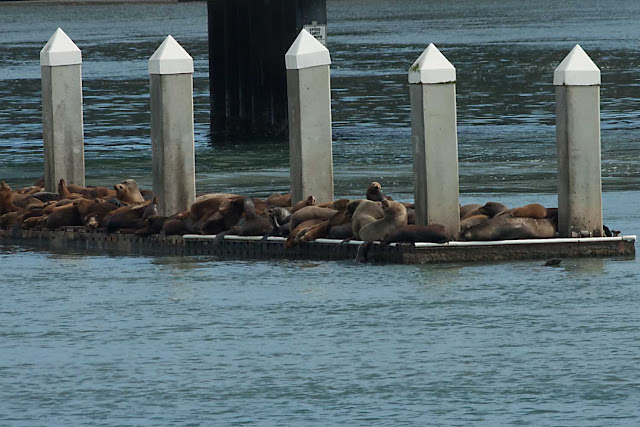 Sea otters weren't the only aquatic mammals, lots of noisy sea lions were piled on the pier.
There were plenty of birds floating in the marina. 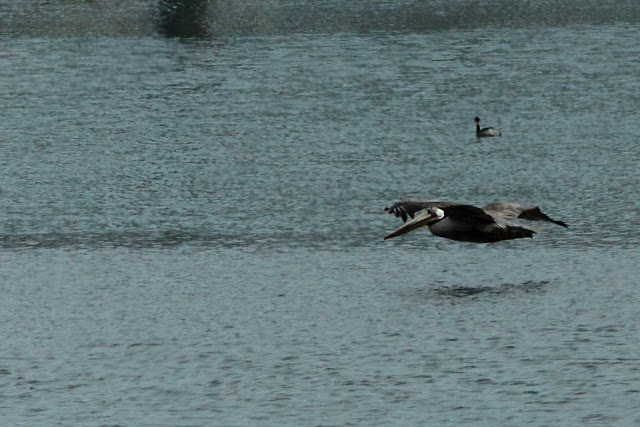 A Brown Pelican flew by and just behind him in the water is a grebe.
Moss Landing is well worth a stop if your ever around Monterey Bay.  If you find yourself in need of some seafood, Phil's Fish Market and Eatery in Moss Landing is a local institution.
This is my view of our world for the week, to see other views visit Our World, Tuesday, hosted for us by Arija, Gattina, Lady Fi, Sylvia and Sandy.
You'll find the otters here.
Phil's is here.
Posted by Martha Z at 7:00 AM 15 comments:

I should never go out without a camera.  On one recent walk I spotted a downy woodpecker, not a common bird where we live.  I returned with the telephoto but of course, no luck.  Perhaps it was just passing through or just feeding in a different part of the woods. 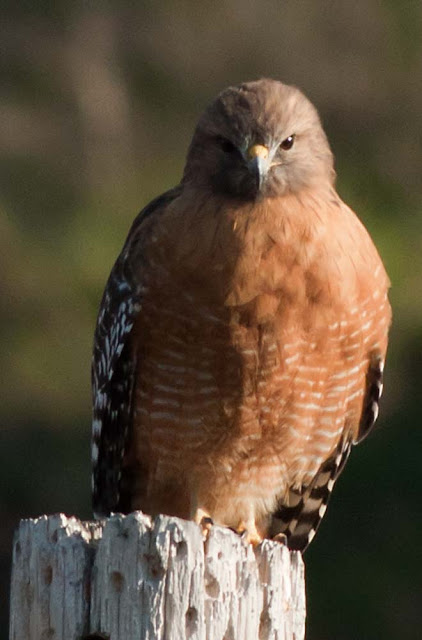 I did spot this handsome Red Shouldered Hawk sitting on a post. 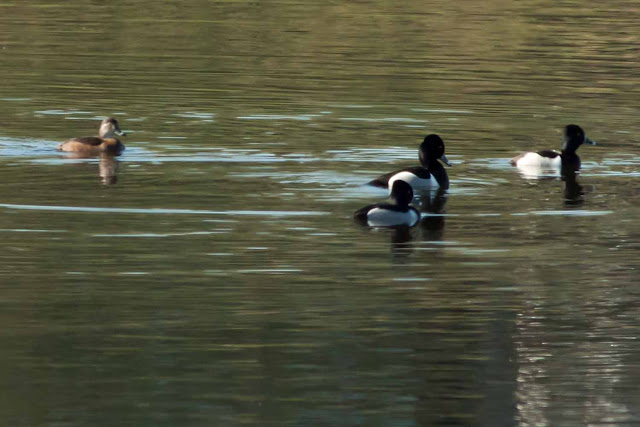 Then I headed to a different area where I had spotted some Ring Necked Ducks, a new one for my Life List.  There was one female and four drakes.  She will be busy if no other gals show up! 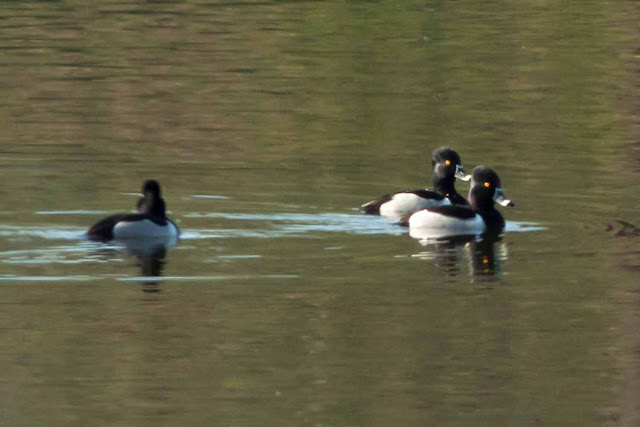 They stayed far away from the shore so  I had to zoom in and crop these shots.  I like the pattern on their bills. 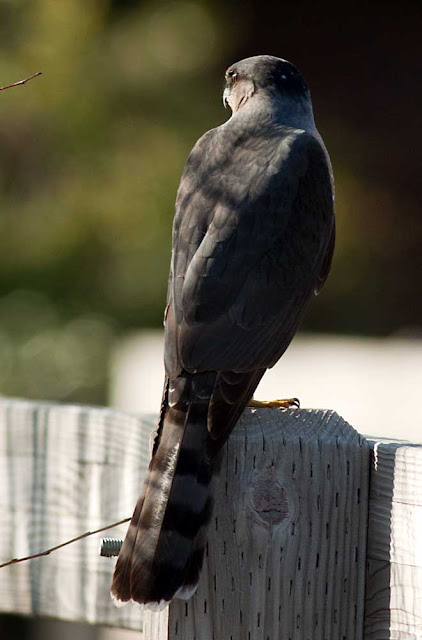 Heading back to the car I saw another hawk sitting on a post about 15 feet away.  A Cooper's Hawk I think but if one of the more experienced birders were to tell me it is a Sharp Shinned I wouldn't argue, they are very similar. 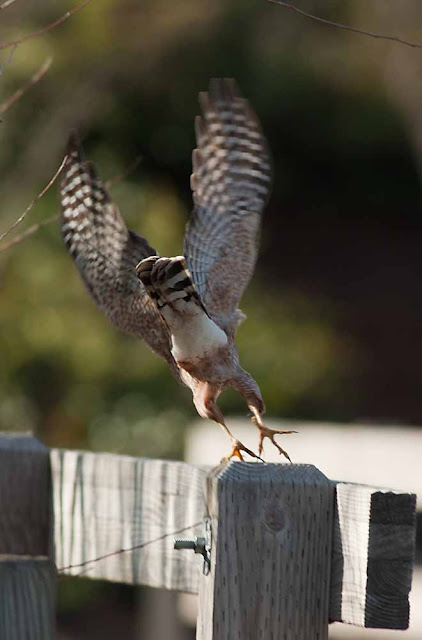 He didn't seem bothered by my presence but took off when a golf cart came by.
See what other birders have to show at World Bird Wednesday, hosted for us by Springman.
Posted by Martha Z at 7:00 AM 22 comments:

Again I went hunting the river otter and again I found a different aquatic mammal than the one I was looking for. 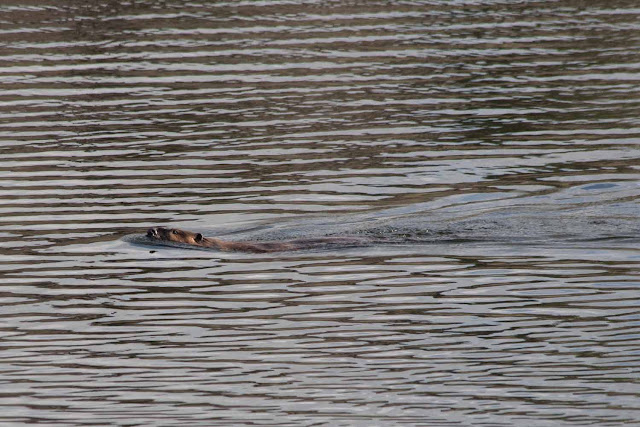 I though I had him this time, from a distance it was hard to tell. 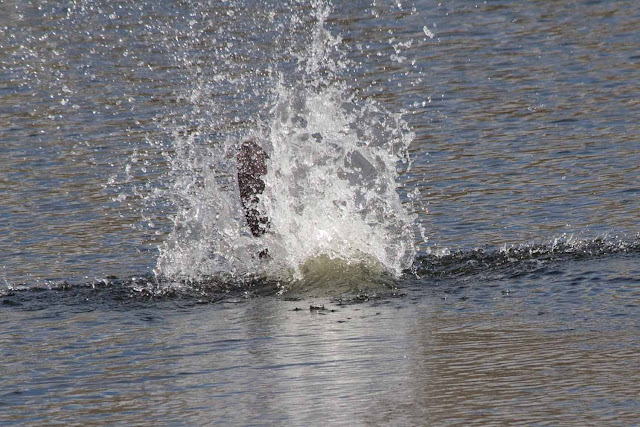 Then a loud slap and a splash told me that it was not the otter. 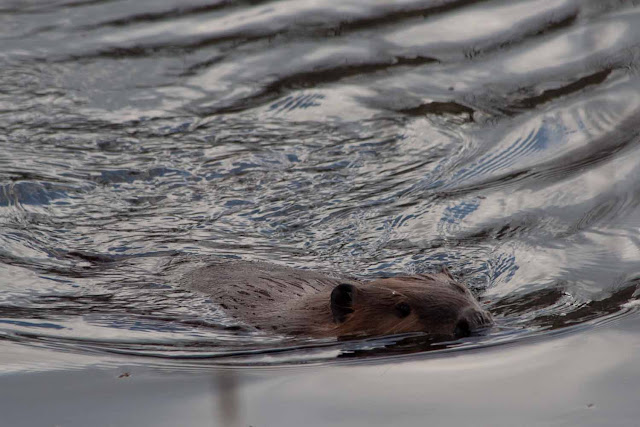 A beaver came swimming up along the row of willows.  They make a snuffling sound as they swim, they sound a bit like a rooting pig. 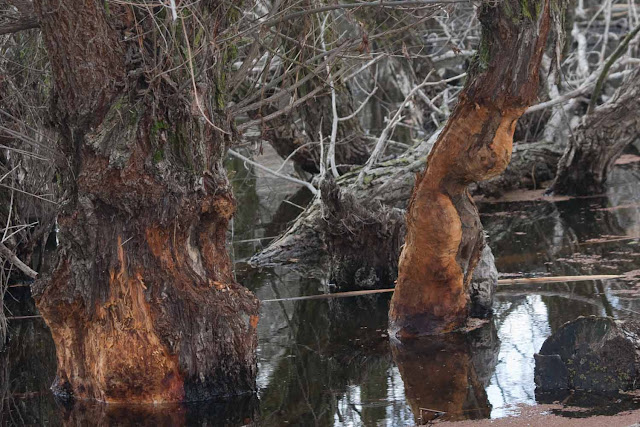 They've been doing quite a job on the willows, before long there will be none left.
This is some of what I have seen in my part of our world last week.  To see more views from around our world go to Our World, Tuesday, hosted for us by Arija, Gattina, Lady Fi, Sylvia and Sandy.
Posted by Martha Z at 7:00 AM 17 comments:

Email ThisBlogThis!Share to TwitterShare to FacebookShare to Pinterest
Labels: Our World, Tuesday

Nothing will get me reaching for my camera faster than the cry of a hawk. 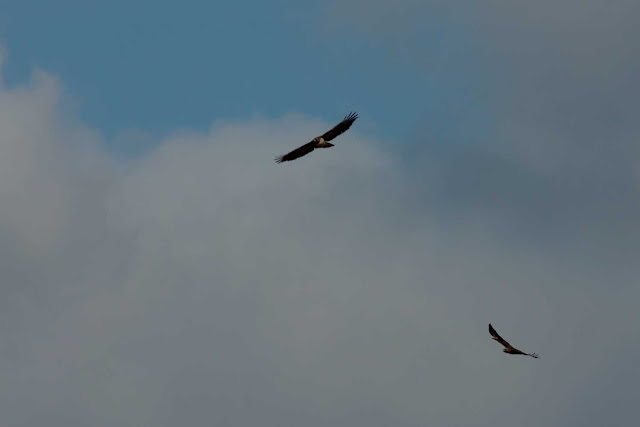 This time we were out for our regular walk and I didn't have my best lens. 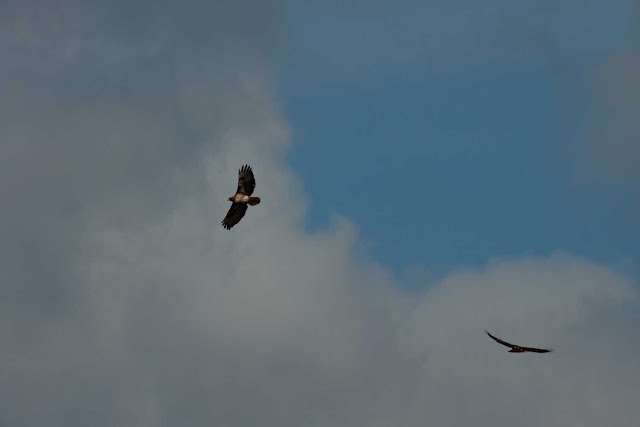 A pair of Red-tailed Hawks were flying together, pairing up I assumed, as creatures do in the spring. 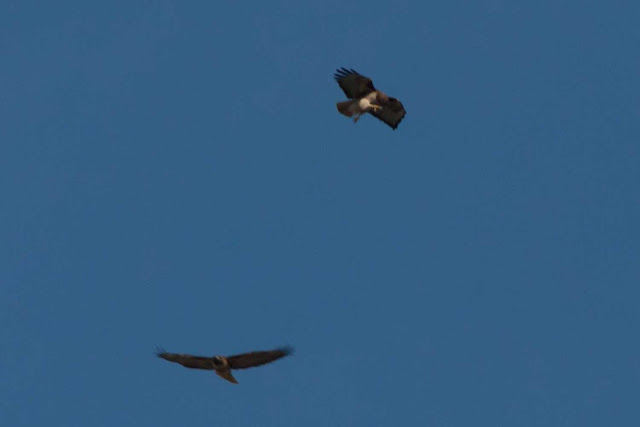 I have read that hawks will soar high up in the sky and grab talons, consummating their courtship in free fall.  If you enlarge this image you will see that the higher of the two birds is assuming a very strange posture, legs down, head down and shoulders hunched, not a normal flying posture for a hawk.
They flew higher and higher, out of sight, but I'm pretty sure I know what he had in mind but was she of the same mind?
You can see more or what is happening in the skies above us at SkyWatch, Friday, hosed for us each week by Arija, Gattina, Lady Fi, Sylvia and Sandy.
Posted by Martha Z at 8:01 PM 22 comments:

My new 400mm lens is too heavy for me to carry on our walks so I've been driving to spots where we have seen interesting subjects.  Unfortunately, the wildlife doesn't usually wait around for me to return with the camera.  Still, patience has its rewards. 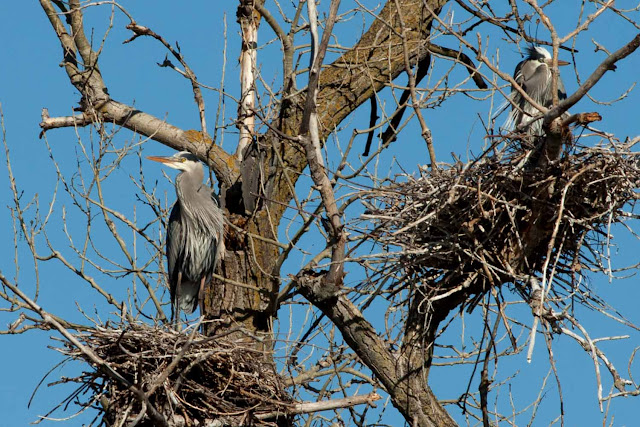 I checked on the heron rookery.  The males are staking out their territory, waiting for some willing female.  There don't seem to be any takers yet and only three nests in this tree that had at least six last year.  I guess it is still early, I'll check back in a few weeks. 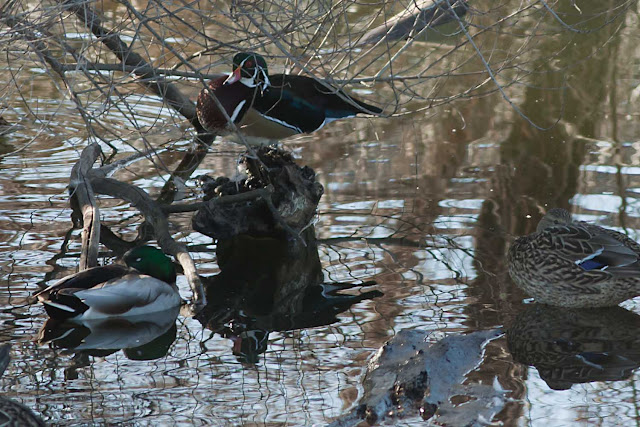 Hooded Mergansers had been spotted in this pond and Hubby and I had seen them nearby on one of our walks.  No luck when I returned with the camera but I did capture an image of this Wood Duck, hiding in the shadows with some mallards. 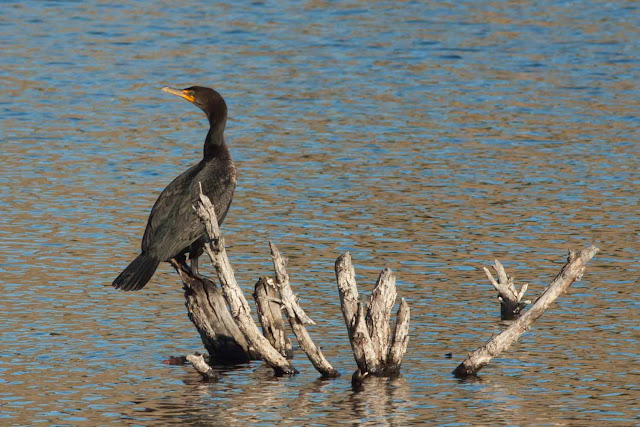 Over at the Mallard Pond I had twice seen a river otter so I headed there.  A cormorant posed for me. 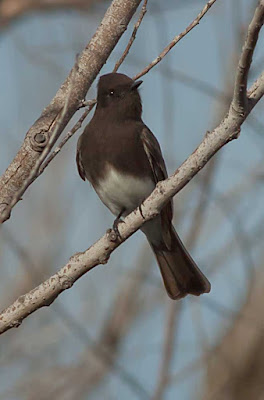 A Black Phoebe landed on a branch.  I do like these little flycatchers, they look so dapper in their cut-away coats.  I enjoy watching them flit off their perch to hawk insects out of the air.
I saw Mallards, Pied-billed Grebes and Egrets but no sight of the otter.
Wait, I see ripples, something is swimming! 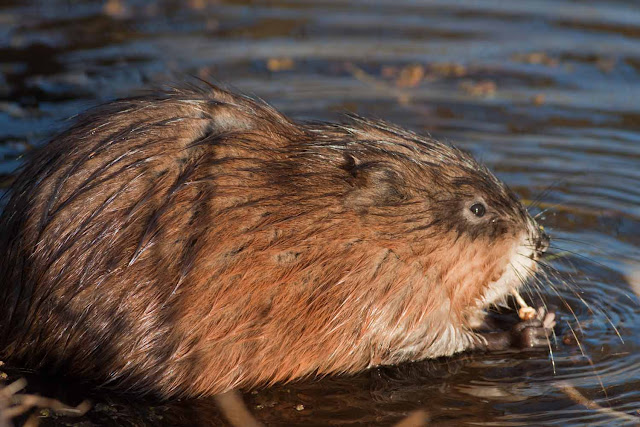 That's not a river otter, it's a muskrat.  He came closer and closer, presenting me with a problem I've never had before in photographing wildlife.  He came so that my lens couldn't focus!  I kept having to back up.  He was only about five feet away when he finally noticed me and moved away. 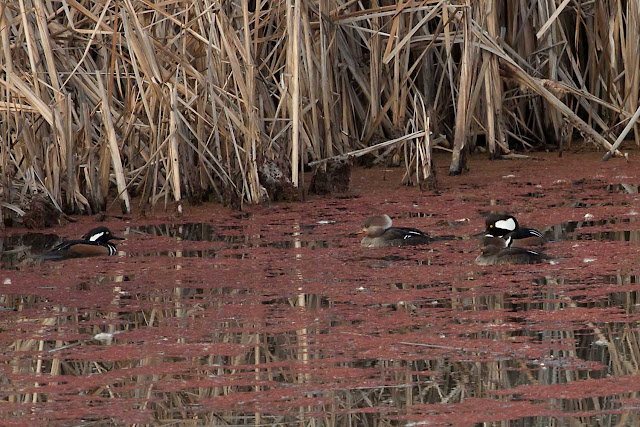 On my way back to the car I spotted a flash of white in a small pond.  Training my lens on the pond I saw not one but two pair of Hooded Mergansers!  Aren't they cute?
They were quite a ways away but my lens didn't fail me.  I'm pleased with the images but still hope to do better.  I will keep looking, hoping for a closer shot.
To find more views of our wonderful world, go to Our World, Tuesday, hosted for us by Arija, Gattina, Lady Fi, Sylvia and Sandy.
To find more images of birds, check out World Bird Wednesday, hosted for us by Springman.
Posted by Martha Z at 7:00 AM 30 comments:

A Strange Vehicle and a Visit With Michael

We made the 400 mile trek to Los Angeles recently to watch grandson Michael while his parent got away for a long weekend.  On the trip home we saw an unusual vehicle up ahead. 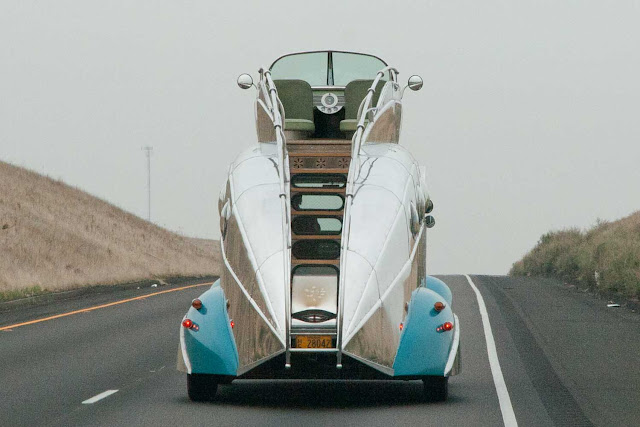 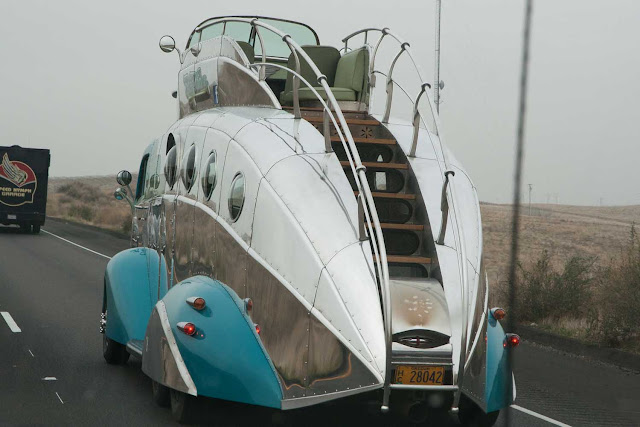 It looked more like a boat than a car. 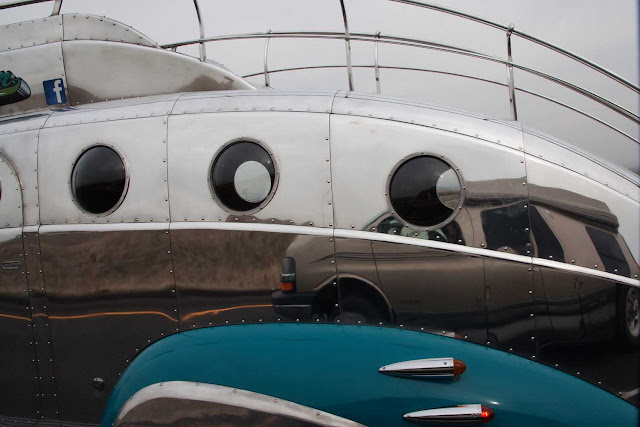 Was it an amphibious vehicle? 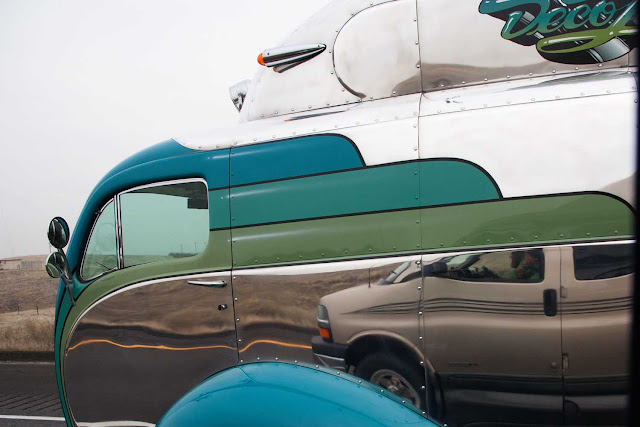 It's hard to get good images on the freeway on a gray day. 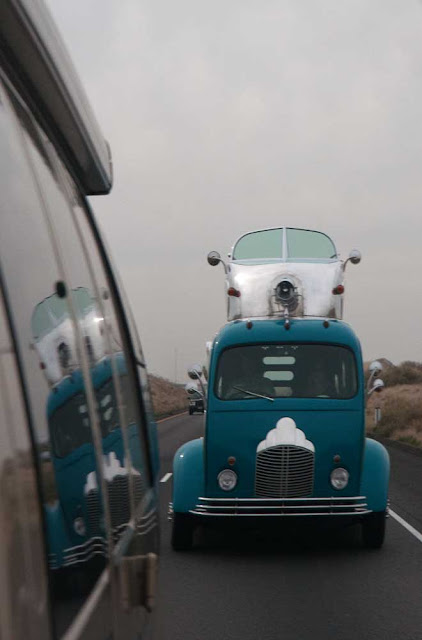 The only way to get a shot of the front was in the rear view mirror.
When we got home I saw the word "Deco" and that looked like an "r" at the end.  I searched "Decoliner" (how did we get by before google?).
Not an amphibious vehicle but a hand built motorhome.  You can read about it here.  I guess those who watch Leno already know about this but I am not a fan of late night or any other TV.
-----------
Our visit with Michael
No pictures of Michael this trip, it's hard to take a picture of someone who is holding your hand.  We did have a nice visit.  He is so unique that it gives me a lot to think about.
Communication is what this visit brings to mind and the different kind of intelligence.  Michael is non-verbal and it is hard to know just how much language he understands, bath, eat, night night, this much I'm sure he knows.
There are ways to communicate other than with words.  He understands that the TV only works if an adult holds the remote.  If he wants to watch he brings someone the remote.  He knows that the crack in the side of a car is where the door opens so he will work his fingers into that crack indicating he wants to go for a drive.
I brought out a simple puzzle, just three flat shapes that must be placed in a similar indentation.  He did it a couple of times, indicating he knows how to do it.  Then he began to put the square in the triangle or stack the pieces, his way of saying "I did it, I don't want to do it again".  Just turning 12 he wants to be his own person.
He may be asserting his independence but he is still very cooperative.  He knows his routine and helps as
much as he is able.  He pushes his arms and legs into clothes to help in dressing and pulls them out when it is time to undress.  He hands his leg braces and shoes in the proper order to whoever is putting them on.  He even hands toothbrush and tooth paste when it is time to get his teeth brushed even though he doesn't care for the process.  He has his limits, though, he loves his bath and goes limp when it is time to get out, no cooperation there.  Like very young children he is fascinated by the texture of food and wants to put his hand in the dish.
See more of our world at Our World, Tuesday, hosted for us by Arija, Gattina, Lady Fi, Sylvia and Sandy.
Posted by Martha Z at 5:37 PM 25 comments: