The Interdependent Web of Life

Before moving here to Lincoln Hills I never gave thought to the interdependent web of life.  As I walked our open space trails, observing the change of seasons I became aware of cycles.  The first thing I noticed was the flowers.  Of course in spring there were many blooms but as Spring changed to Summer and Summer to Fall I noticed that there was always something in bloom, something to feed the pollinators.  The pollinators depended on the succession of bloom and the plants depended on the pollinators to reproduce. When I heard about the problems caused by monoculture, the growing of a single crop on large tracts of land, I understood.  Once that tree or crop has bloomed it is a desert for the native pollinators. 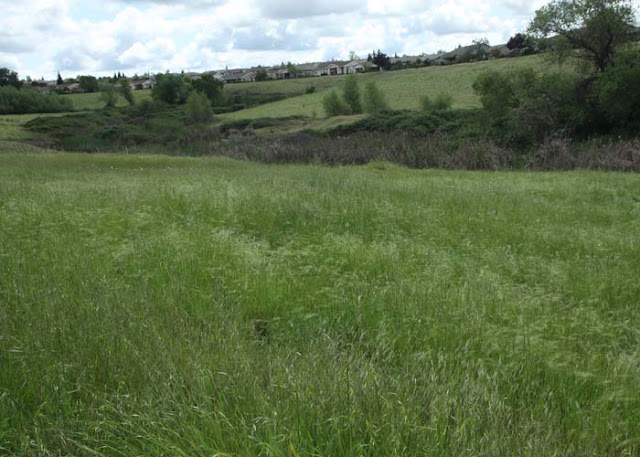 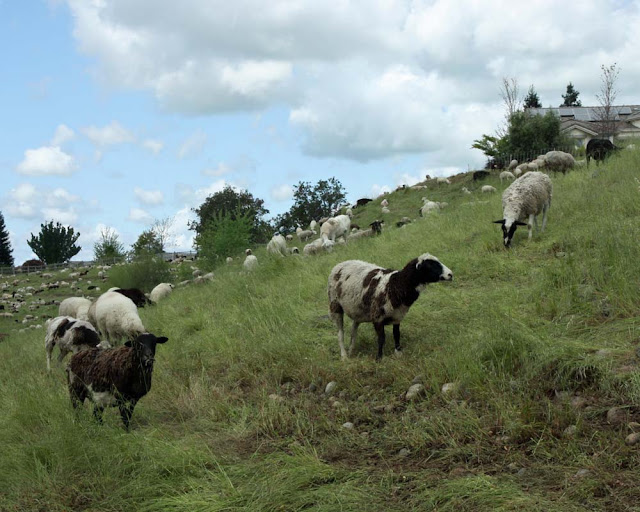 Then the homeowners association had sheep brought in to eat and trample the grass as a fire control measure. 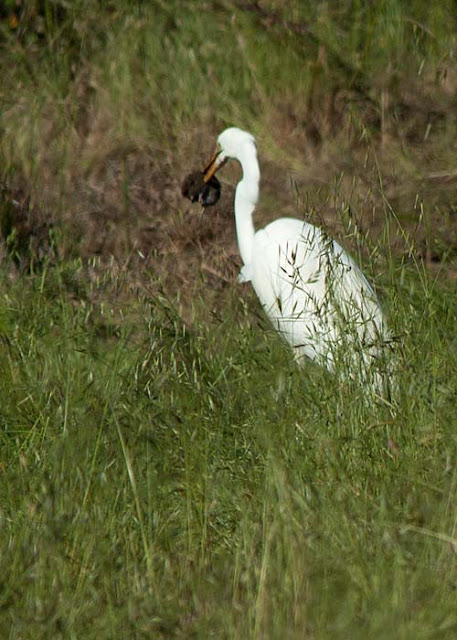 Then the egrets were back.  With the grass beaten down they could more easily find the voles. 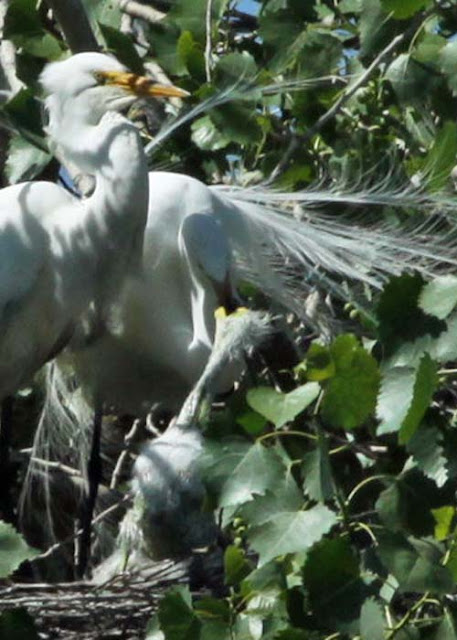 Voles they needed to feed their chicks.
Voles, rabbits and mice eat the grass and multiply.  In nature deer would come, eat and tramp down the grass (probably not as efficiently as the sheep) making it easier for birds of prey and coyotes to find a meal.
Nature has a balance, a balance that we too often disturb.  The use of sheep to graze the grass helps to restore that balance.  The sheep are moved every couple of days, leaving plenty of grass for habitat but reducing the fuel for fires.
Find more views of our world at Our World Tuesday
Posted by Martha Z at 8:24 PM 4 comments:

Email ThisBlogThis!Share to TwitterShare to FacebookShare to Pinterest
Labels: Egrets, Our World, sheep, web of life

After visiting Death Valley we headed further south to Joshua Tree National Park.  Since we no longer camp I looked on the internet to find a place that might still give us a comfortable outdoor space.  What I chose was Spin and Margies, about halfway between the two northern entrances to the park. 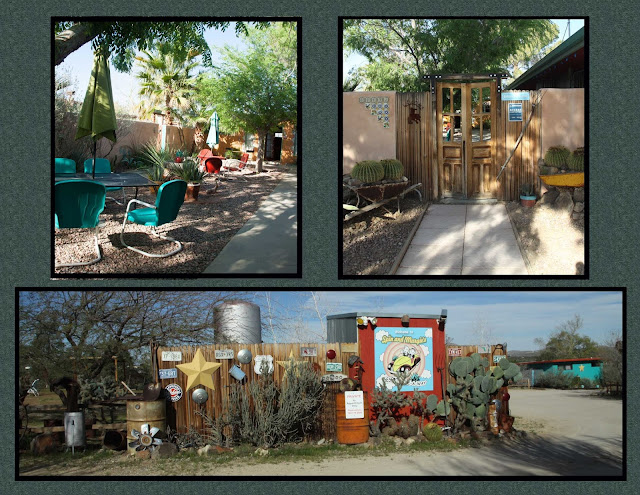 There were five units, four of which have kitchens, just what we wanted.  Retro?, funky?, I don't quite know how to describe this place but we enjoyed our stay. 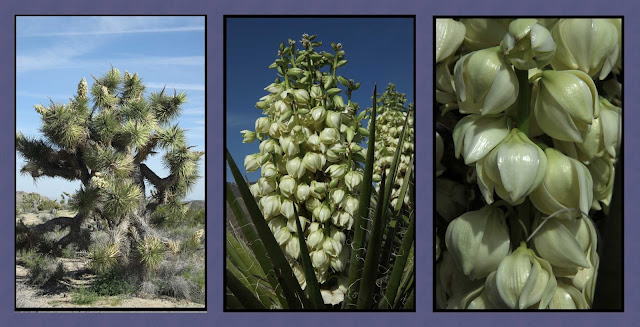 Driving into the park we soon encountered some "Joshua Trees".  A variety of Yucca said to get its name because it reminded some of Joshua lifting his arms in prayer.  I'm not sure if the blossoms are of young Joshua Trees or the Mojave Yucca, also found in the park.  Probably the latter. 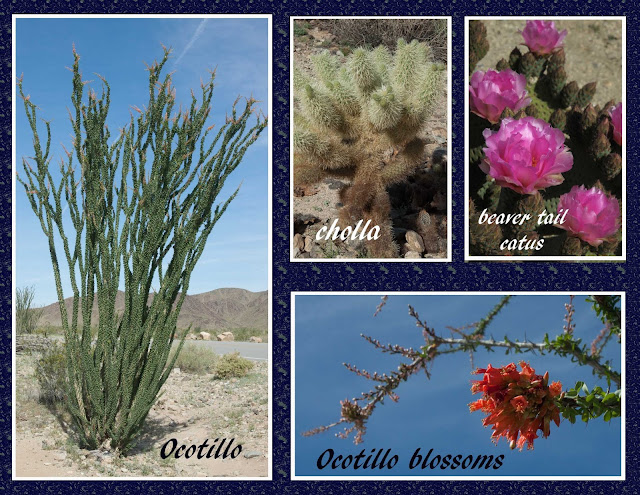 Next down the road we came to a turnout for an exhibit of the cholla, also called "teddy bear cactus", you wouldn't want to hug these teddys, though.  Also at the turnout is a nice stand of ocotillo and some beaver tail cactus.  The ocotillo, greener than I had ever seen them, due I imagine, to this years heavy rains. 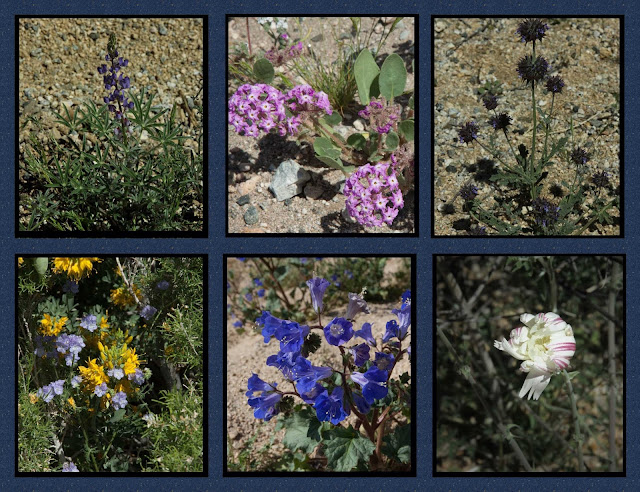 We continued on down to Cottonwood Spring, lots of wildflowers along the way.  We didn't spend as much time as we might have as Jules was not feeling well.  I now realize that he was beginning to feel the effects of gallbladder trouble that would hit him hard after we got home. 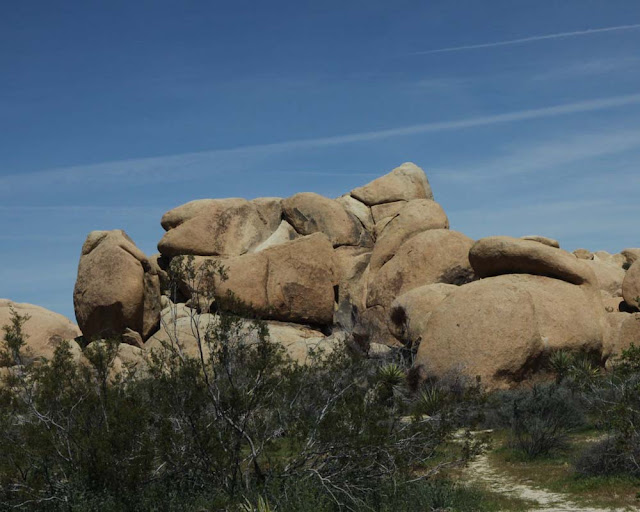 I like the rock formations of Joshua tree almost as much as I do the spring flowers. 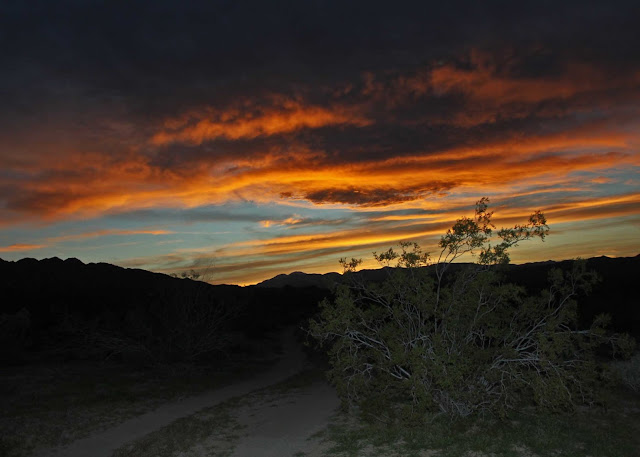 At the end of the day we were treated to a beautiful sunset. 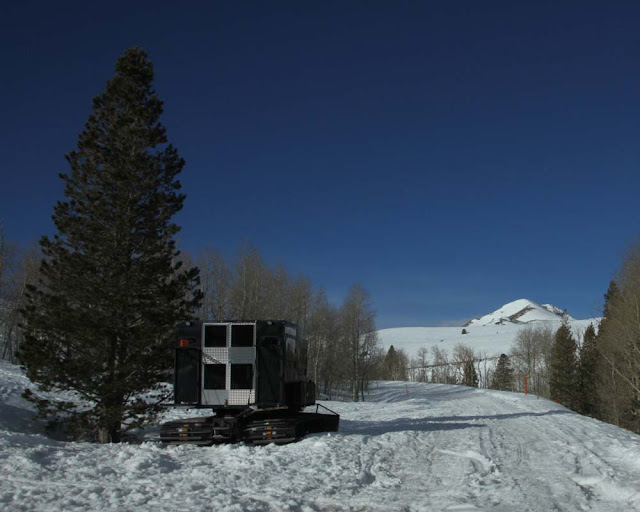 Heading home we took the somewhat longer route that brought us by the road to our summer cabin.  The county had not yet begun to plow the 5 1/2 miles.  It looks like summer is still a ways off at Virginia Lakes.

Find more view of our Wonderful World at Our World, Tuesday

These signs of Spring were spotted this week near my home in Lincoln, CA. 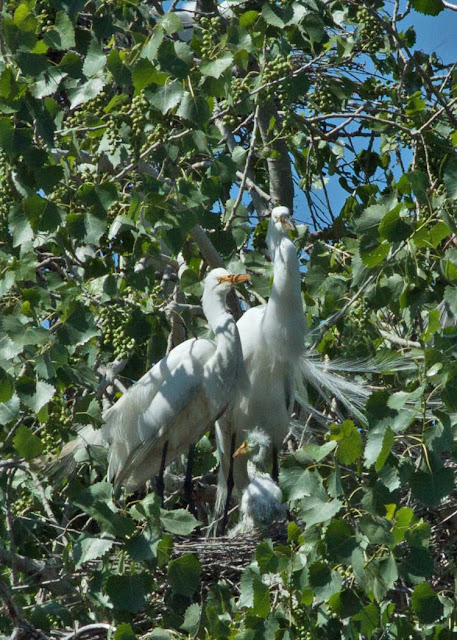 This egret family was in a tree between two shopping centers.  They had plenty of company with many nesting egrets and herons in the same tree.  The chick isn't as cute as some of the other babies I saw. 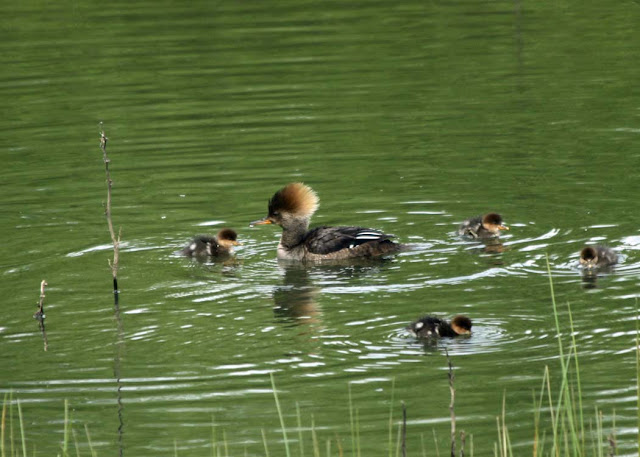 Hooded merganser and chicks in a nearby pond. 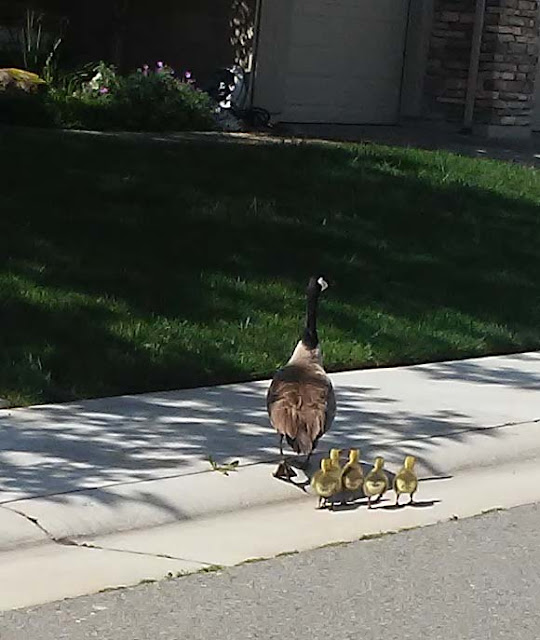 Family of geese walking down my street. 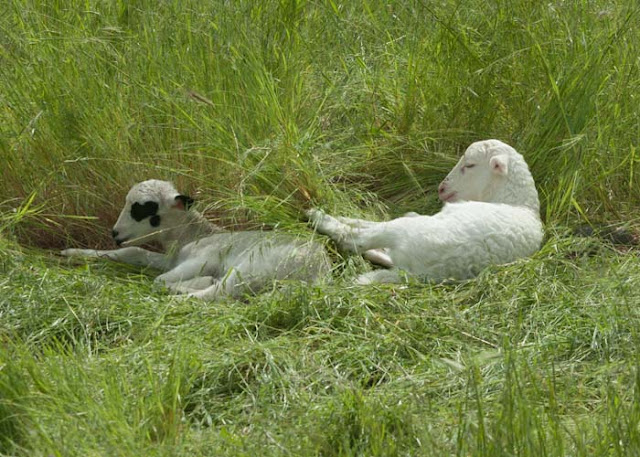 Lambs whose moms had been brought in to graze the open space in our community.
The circle of life continues.

Last month we took a trip to the desert in the hope of finding some desert wildflowers.  Our first stop was Death Valley.  It was unusually hot for March and there were no wildflowers.  No problem, there was still plenty to see and do and we had a good time.
We stayed at Furnace Creek Inn.  In the past we had either camped or stayed at the Furnace Creek Ranch, a motel style lodging.  The Inn proved to be a perfect choice.  During the hot afternoons we could wander the corridors of the hotel for exercise or go down to the oasis garden.


We did our sightseeing in the morning, before it got hot.


There were plenty of people out exploring the dunes.
Did I say there were no wildflowers?  That is not quite true.  The creosote was in full bloom. 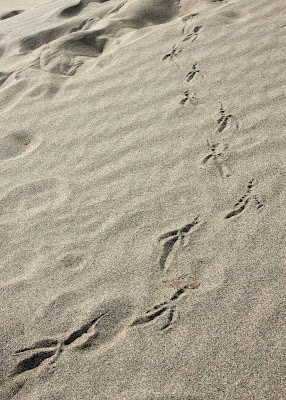 Although we didn't see the critters that made them, there were plenty of tracks out on the dunes. 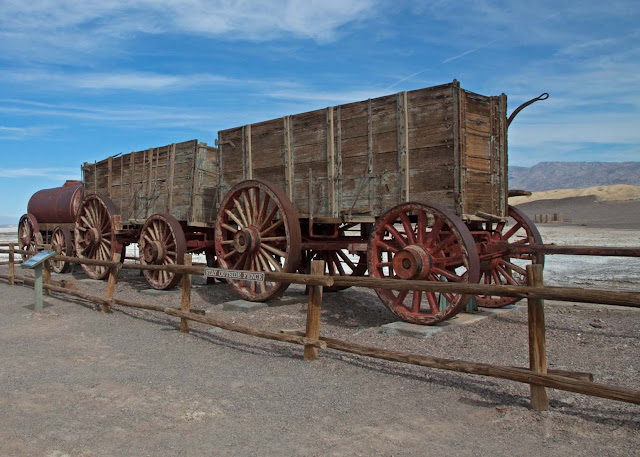 Old borax wagons were on display at the remains of the borax works.
No trip to death Valley would be complete without a visit to Bad Water 282 feet below sea level.  Due to recent rains there were water filled potholes in which salt was crystallizing.  Unfortunately, it seems visitors found the potholes irresistible and most of them had been disturbed and the newly formed crystals destroyed. 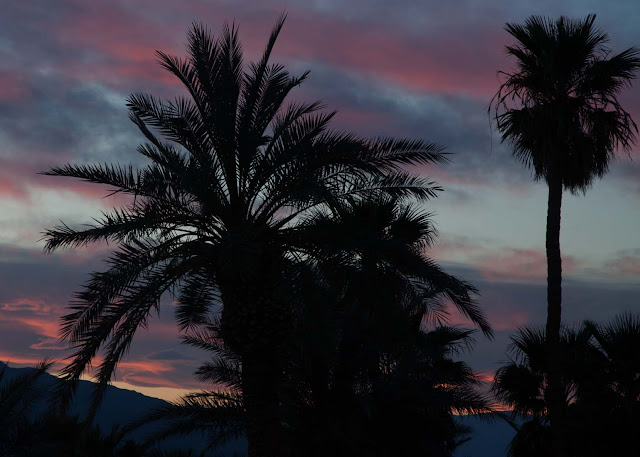 At the end of the day we found a spot to watch the sunset and see the stars come out. 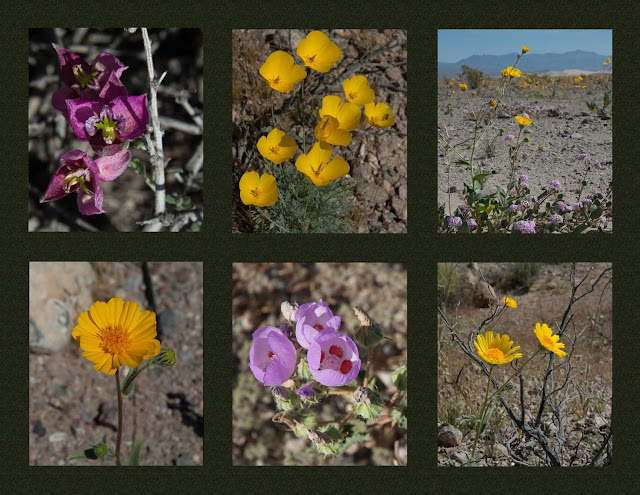 On our way to our next stop we finally found our wildflowers.


Find other views of our wonderful world at Our World Tuesday
Posted by Martha Z at 8:27 PM 10 comments: