Reflecting on a Reflection 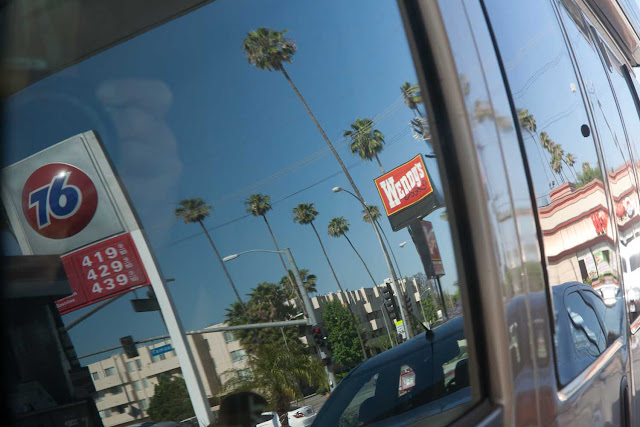 While Jules was fueling the van I noticed this unusual reflection in the side-view mirror and did a double take.
Did you notice what is unusual?  The lettering is not backwards because it is a reflection of a reflection.

We scouted several days in advance and decided to view the eclipse from a viewpoint on route 70 with a great view to the west. 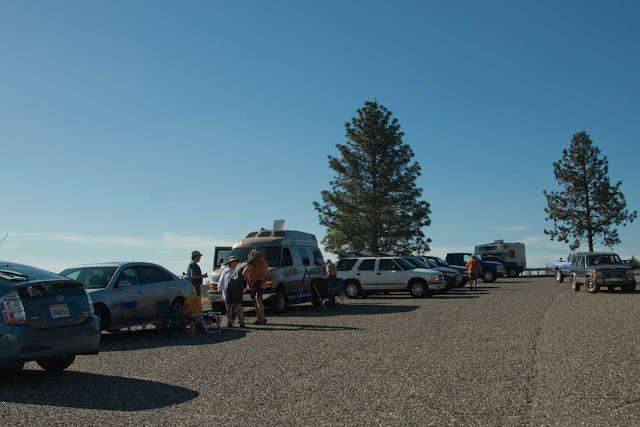 Lots of other people had the same idea.  It was like a 4th of July tail gate party.  People sharing food and viewing lenses. 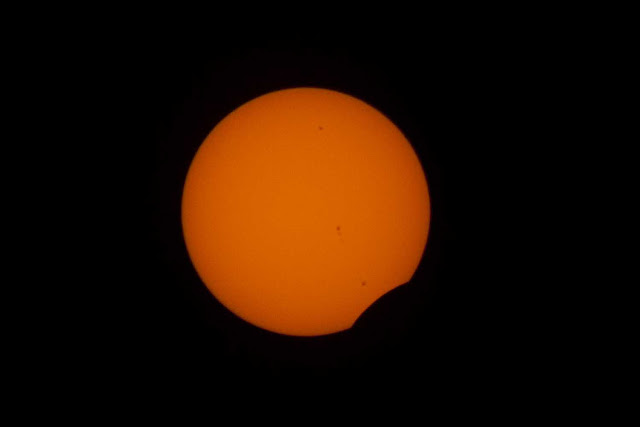 We had sent for some inexpensive filters and experimented with them in advance. 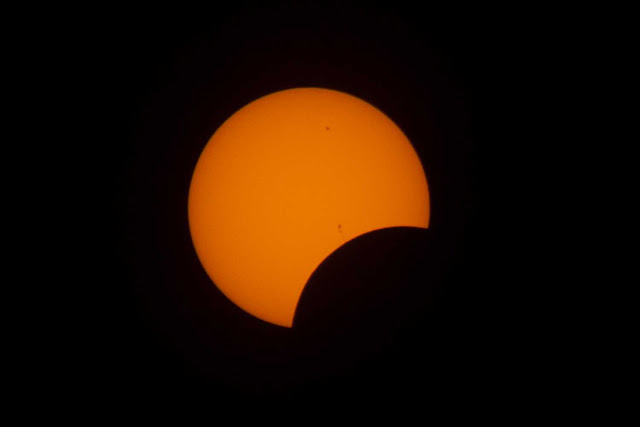 They aren't the best but they do the job.  You can even pick out some sunspots. 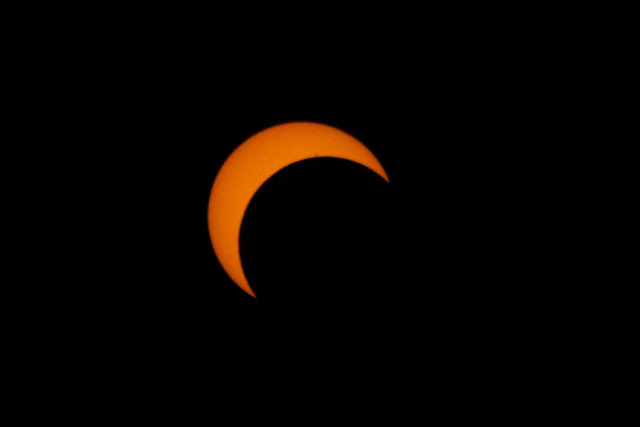 As the sun progressed behind the moon it got progressively cooler. 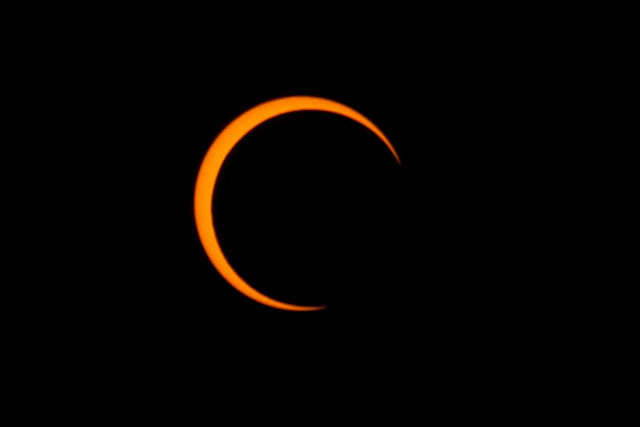 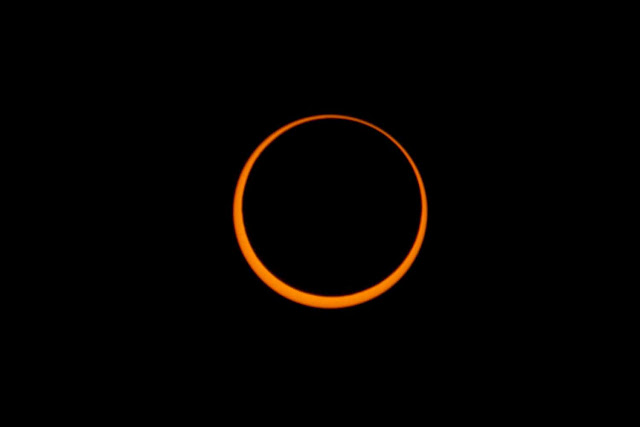 Now!  It didn't get dark as I understand it does in a total eclipse, not even as dark as a cloudy day but it was great to see. 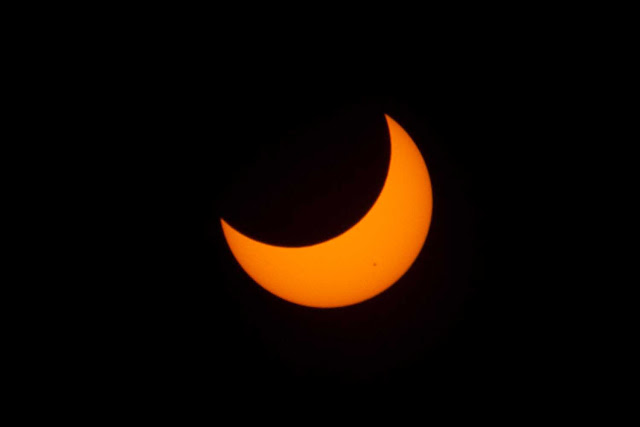 Soon the sun moved out from behind the moon and people packed up and left, a brief event, a brief community of observers and then it was over.
Hubby and I are hooked, though.  We hope we can view the total eclipse in 2017.  The path for that will start in northern Oregon crossing the nation and ending in South Carolina.


Find more views of the sky at SkyWatch, Friday; hosted for us by Sandy and Sylvia
Posted by Martha Z at 7:00 AM 18 comments:

Flowers Along the Way

The state is building a bypass around our little town.  It won't open until the end of the year but they have already planted wildflowers along the right-of-way. 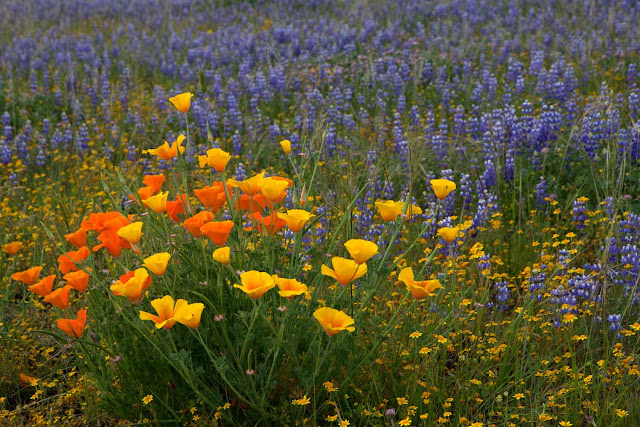 We went out a few weeks ago to take a look.
At least this little strip of land in being returned to the natural beauty that John Muir wrote about.  Most of California's Great Valley is cultivated or grazed with few of the native plants to be found.  I guess there is something positive that can be said for freeways.

Find more flowers at Today's Flowers, hosted by Luiz.
Find more views of our wonderful world at Our World, Tuesday, hosted by Arija, Gattina, Lady Fi, Sylvia and Sandy.
Posted by Martha Z at 7:00 AM 18 comments:

Getting Ready for the Eclipse!

We are getting ready for the annular eclipse on May 20.  When we found out that the path of the eclipse would take it within 50 miles of our home we ordered eclipse glasses and eclipse filters for our cameras.  Even at maximum an annular eclipse WILL damage eyes and cameras if not protected by lenses and filters designed for maximum protection.  Other parts of the country will experience a partial eclipse.
Be prepared, if you can't get viewing glasses or welder's glasses in time (try Amazon), look here for information on making a pin hole viewer.  If you left click your location on the map of the path you will see how much of the sun will be obscured and the time (in universal time) it will be at maximum.
We need to explore north of Lincoln for the best viewing site and, of course, hope for clear skies on the 20th.

Find more views of the sky at SkyWatch, Friday, hosted for us by Sandy and Sylvia.
Posted by Martha Z at 8:27 AM 24 comments: